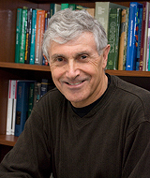 Dr. Rossi is Chair and Professor of the Department of Molecular and Cellular Biology, Beckman Research Institute of City of Hope, Duarte, CA

The biology and applications of small RNAs.

The Rossi lab has as its primary focus studies on the functions and therapeutic applications of small RNAs. Within the past two decades there has been an explosion of new findings about roles that small RNAs play in biological processes. Ribozymes are RNA molecules with enzymatic activities. There are many different types of ribozymes in nature but our lab has focused upon the hammerhead motif which is found as part of the self-cleaving domain of small plant viruses. We have exploited these ribozymes for both basic studies of RNA catalysis and for therapeutic applications.  Ribozymes developed in our research program have been developed to target HIV and these have been inserted into human blood progenitor cells via a retroviral vector as part of a gene therapy program for the treatment of HIV infection. To date 10 HIV positive patients have been treated with ribozymes developed in the lab. Efforts to improve catalytic efficiency and co-localization of ribozymes with their targets in mammalian cells are still an ongoing effort in the lab.

The recent discovery of RNA interference in which long double stranded RNAs or RNA hairpins are processed in smaller 21 to 23 base duplexes called small interfering RNAs and micro RNAs has revolutionized mammalian cell genetics. These small RNAs can be used to inhibit gene expression by targeting mRNAs with complementary sequences. The lab has been studying the mechanism of RNAi at the biochemical level as well as exploiting this phenomenon for therapeutic applications in AIDS and cancer. One of our discoveries is that dsRNAs that are long enough to be processed by the RNAi machinery, but short enough not to activate the interferon pathway, called Dicer substrate siRNAs, have enhanced potency and duration of action relative to the 21 base long siRNAs used in most studies. One focus of the laboratory is to understand how linking processing with function enhances the activity of these siRNAs. Another area of research in the lab concerns the mechanisms by which small double stranded RNAs can trigger transcriptional gene silencing and activation by modulating the histone code. These small RNAs use components of the RNA interference machinery to target chromatin. A major effort in the lab is to elucidate the active components of this process and to apply transcriptional gene silencing in a therapeutic setting.  Finally, the laboratory has been actively using an in vitro evolution process (SELEX) to evolve RNA aptamers for use as therapeutics but also to serve as siRNA delivery vehicles. We have successfully evolved families of aptamers targeting the HIV envelope that neutralize HIV infectivity, yet can be internalized in HIV infected cells to deliver therapeutic siRNAs. Aptamers are also being selected against specific cellular receptors for use in cancer therapy.