Research on Sexual Behavior of Galapagos Marine Iguanas (with photographs)

In collaborative research with Dr. Ron Carter (Loma Linda University) and Dr. Martin Wikelski (Princeton University), we are exploring the behavioral decisions of Galapagos marine iguanas which exhibit a bizarre but fascinating mating system documented only recently by Dr. Wikelksi. The marine iguana is unique not only in being the only lizard that actually enters the ocean to feed on algae, it is also exhibits a lek mating system (which apparently exists in green iguanas as well). Until recently, no reptiles were known to exhibit a lek mating system.

Like sage grouse and prairie chickens (in North America) that gather each spring to display in a localized area, male iguanas similarly cluster each year along the rocky, supratidal zone to strut their stuff in front of the much smaller, less colorful females. Female iguanas visit the lek to choose which male they wish to mate. Large, territorial males acquire most of the matings. However, some of the smaller males use alternative tactics. Smaller males move onto a lek territory where they are difficult to distinguish from females, and attempt to forcibly inseminate a female before being chased away by the territorial male. Incredibly, these smaller, "sneaker" males may actually begin to masturbate before mounting a female to more quickly ejaculate before being displaced by the territorial male! Intermediate-sized "satellite" males remain outside of but near a lek territory, and likewise attempt forced copulations of females.

We began a study of marine iguanas on Caamano Cay in January 1997. After capturing, marking, and procuring blood from more than 200 territorial males, most of whom swam out to the cay from the nearby, much larger island, Santa Cruz, we conducted behavioral observations on all marked males that continued through the end of mating season (early February). We then captured and similarly processed females when they moved inland to nest in the sandy interior of the island. We also captured and processed hatchlings as they emerged to document their growth and survival (fitness).

By using DNA fingerprinting of the field-collected blood samples, we had hoped to identity the parents of the hatchling iguanas. By combining the molecular analyses with behavioral observations of mating success, we wanted to quantify for the first time in a lek-mating reptile the components of male-male competition, female choice, sexual selection, and possible multiple paternity. However, the number of nesting females and hatchlings far exceeded our expectations and we were unable to achieve these goals.

Nevertheless, we did learn important things about the marine iguana mating system. Our statistical analyses suggest that female marine iguanas potentially use more cues for mate choice than other lizard studied to date. They prefer larger males (particularly those with wider heads), males that exhibit higher levels of behavioral activity, males with larger ornamentation (nuchal and dorsal crests), males with fewer ectoparasites (ticks and mites), and males with superior body condition.

We also discovered that some intermediate-sized males adopt yet another mating tactic. During low tide, these males move to the intertidal zone and exhibit lek-associated courtship activities toward females moving to and from the algal beds. These "intertidal lekkers" achieve some copulatory success, but are not big enough to hold the stationary territories of the supratidal zone that are occupied by the largest males.

You can read more about the findings of our research in an article (Hayes et al., 2004) published in the peer-reviewed volume, Iguanas: Biology and Conservation (A. C. Alberts et al., Editors, 2004, University of California Press; see UC Press description of book). Dr. Martin Wikelski has published an impressive number of articles on other fascinating and unique aspects of marine iguana biology, and has an interesting web site to visit. 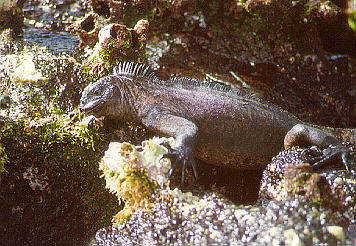 Feeding on the algal beds. The marine iguana (Amblyrhynchus subcristata) is unique among terrestrial reptiles in that it feeds almost exclusively on marine algae. Smaller iguanas feed on algae exposed during low tides, while the larger iguanas often swim out and dive to the rich algal beds beneath the sea. Photograph: William K. Hayes. 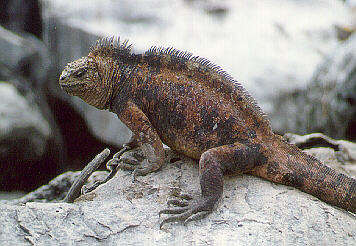 Territorial male Marine Iguana. Only the largest males are able to defend a small clump of rocky terrain from other lekking and sneaker males. They aggressively display toward females that cluster in their territories, exhibiting considerable head-bobbing, often with their mouths open. They approach solicitous females by walking sideways toward them, and then attempt to grasp them by the nape using their jaws. As is true of most lek-mating animals, only a small portion of the male iguanas (usually the largest) are successful in mating females. Photograph: William K. Hayes. 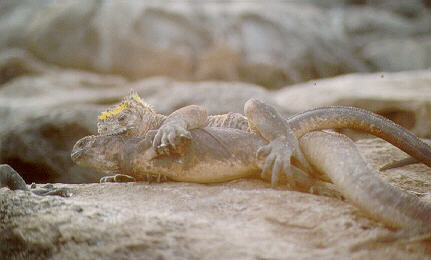 The harem master in action. Once a female has been grasped, the male struts about briefly with his prize, perhaps displaying his "success" to other iguanas nearby. He then lies on top of the female and gently inserts one of his two hemipenes, remaining entwined for 5-10 minutes or more. In contrast to territorial males, sneaker males dispense with courtship and roughly force themselves upon the female. Photograph: William K. Hayes. 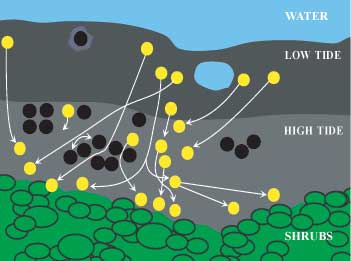 Intertidal lekking...an alternative mating tactic. We discovered that some male iguanas exhibit lekking behavior toward females foraging in the intertidal zone during low tide. However, the intertidal lekkers (positions shown in yellow) were smaller in size than the territorial males (stationary lekkers, shown in black) and at high tide moved to peripheral positions outside of the leks, where they no longer had access to females. Source: Hayes et al., unpublished data. 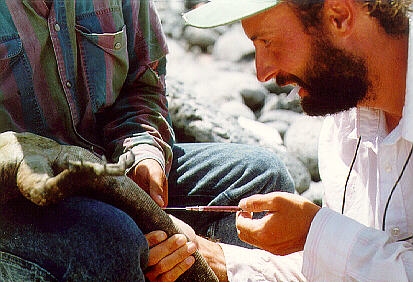 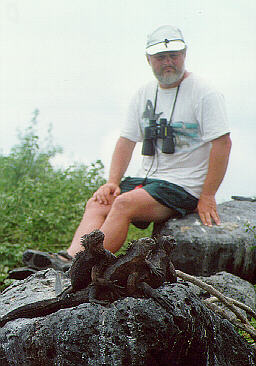 Behavioral observations. Dr. Ron Carter observes a cluster of bachelor males, which often gather together in areas some distance from the leks but near routes where females move to and from the feeding grounds. Photograph: William K. Hayes. 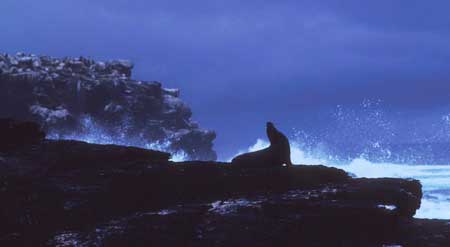 Defiance. This Galapagos Sea Lion exemplifies the spirit of many life forms in the spectacular but harsh and unforgiving environments. Anyone who has visited the archipelago will have images such as these forever etched in their mind. Photograph: William K. Hayes.