Research on Behavioral Ecology of Desert Tortoises (with photographs)

The Desert Tortoise (Gopherus agassizii) population inhabiting the Mojave Desert has suffered alarming declines in recent decades. The state of California and the federal government have both listed the species as "threatened." The west Mojave population is considered "endangered." With expansive bases and intensive training activities in the heart of fragile Desert Tortoise habitat, the U.S. military plays an important role in the future of this reptile. Fortunately, the military provides considerable funding, aimed not only toward safeguarding the tortoise, but also to better understand its natural history and ecological requirements. An impressive number of independent studies are currently probing the biology of this tortoise, causes for its demise, and options for better managing its remaining populations.

Although my involvement is minimal, I am privileged to collaborate on one such project with Meagan Harless, a current student in my lab, and Andrew Walde, Field Coordinator and Research Biologist for the U.S. Army Construction Engineering Research Laboratories (USA-CERL) Desert Tortoise Project at Fort Irwin, near Barstow, California. Through radiotelemetry, an experimental automated telemetry system, and good old-fashioned legwork, Andrew, Meagan, and their assistants have collected a massive data base from a large sample of animals. My role is mostly limited to statistical analyses of the data, though I wish I had the opportunity to put more meaningful time in the field. Some of the analyses that will prove insightful include home range utilization, movements and activity, temperature relationships, microhabitat use, and social and reproductive behaviors.

Why are the tortoises disappearing? We're still trying to figure this out. Humans must accept much of the blame. The tortoises are rapidly losing habitat to development, and what remains is increasingly fragmented. Being slow-moving creatures, they are frequently crushed by vehicles, both on- and off-road. They are often collected and/or killed illegally. Livestock grazing and invasive plant species cause further habitat deterioration. Increasing predation is taking a toll, in part due to cats and dogs, but also because of Common Ravens (a crow-like bird) that are rapidly increasing due to human-associated changes in food supplies (e.g., roadkills, landfills) and resting and nesting sites (e.g., fence posts, power poles). Several diseases may be on the increase, including an upper respiratory tract disease (URTD), which has possibly been introduced into new populations via illegal release of captive tortoises (recent studies suggest the disease has always been present in wild populations).

To describe some of the basic research objectives and methods, I'll simply illustrate them in the following images. Again, tortoises are not my primary research, and my involvement in the project is very limited. Even so, I have to admire the way these little beasts continue to survive in such a harsh and unforgiving environment. May they never disappear from our deserts! 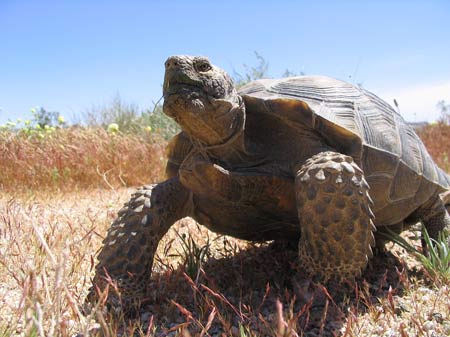 Beast of the desert! Clad in impressive armor, superficially resembling the military tanks that rumble through its habitat, this large male Desert Tortoise (Gopherus agassizii) carries a well-fortified refuge on his back wherever he goes. Even so, he's highly susceptible to heat and dehydration and must seek shelter from the sun, usually in a burrow that he digs himself beneath a shrub. Photograph: Chris Howey/USA-CERL Desert Tortoise Project. 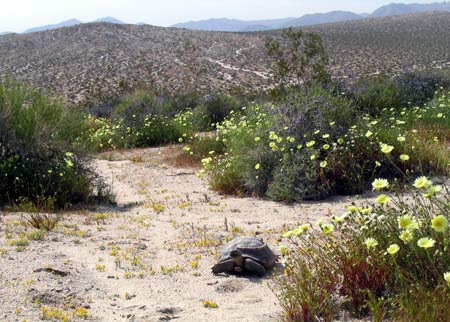 On the prowl. Each spring, if sufficient rain has fallen, the tortoises seek wildflowers to forage on, storing fat and water for much of the remainder of the year. They also look for opportunities to mate. As the heat builds during the summer months, they become much less active until late-summer rains and/or autumn cooling brings them out once again. Most of their activities are restricted to the morning hours, especially during hot weather. Photograph: Meagan Harless/USA-CERL Desert Tortoise Project. 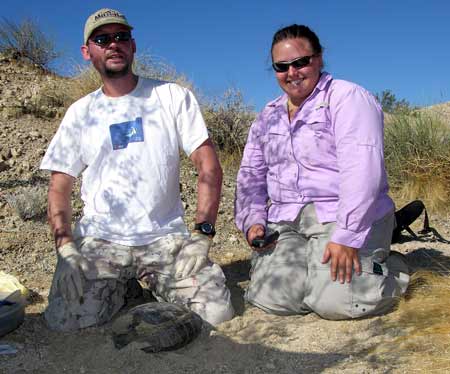 The tortoise team. Andrew Walde (left) and Meagan Harless (right) have just located a tortoise, and are getting ready to process it. The gloves that Andrew is wearing are required anytime a tortoise is handled because of concerns about transmitting disease from one tortoise to another. Photograph: William K. Hayes. 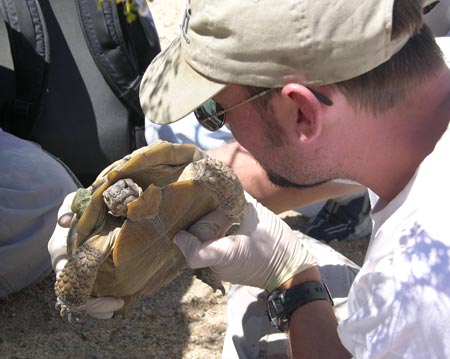 Do we have to do this again? This tortoise has been recaptured to replace the transmitter glued to its carapace (the upper shell) and to collect temperature data from a sensor and logger also attached to its carapace. While the tortoise is in hand it is inspected for visual signs of Upper Respiratory Tract Disease (URTD) and other disease symptoms. Photograph: William K. Hayes. 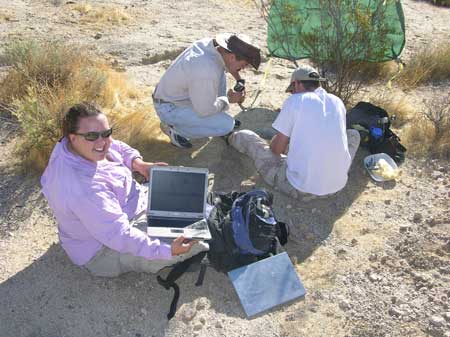 Data! Meagan proudly displays the one-year temperature profile that she just downloaded from a tortoise. Temperature spikes indicate bouts of above-ground activity. In the background, Andrew (right) and Stephen Dunbar (visiting scientist, left, with camera in hands) are processing a tortoise in shade created to protect the tortoise from over-heating. Photograph: William K. Hayes. 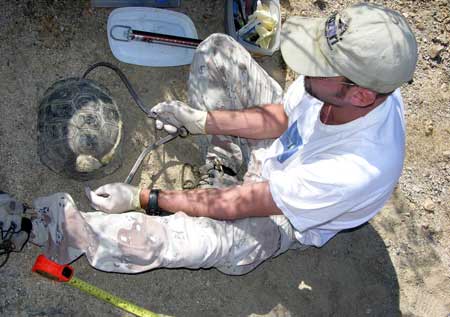 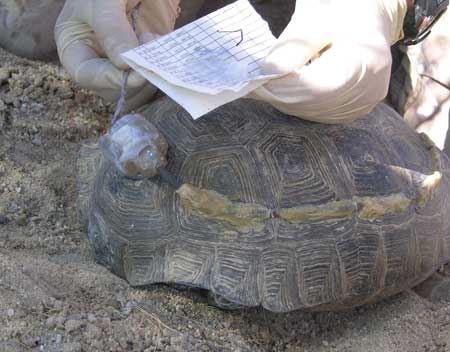 You can run but you can't hide... Each tortoise in the study has a radiotransmitter glued with epoxy to its carapace. The transmitter's antenna is threaded through a tube that is also glued to the shell. The transmitter gives off a radio signal that can be picked up by an antenna-receiver system, permitting the investigator to relocate the tortoise at will—even when the tortoise is in its burrow. Photograph: William K. Hayes. 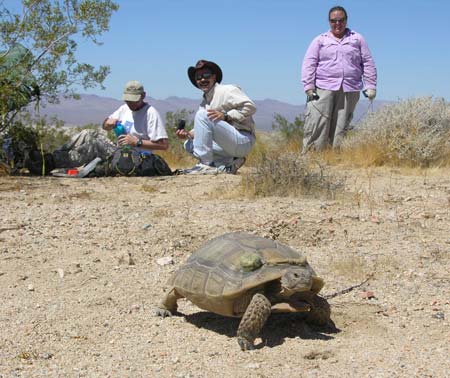 Free, at last? This female tortoise is happy to be on her way once again. Transmitters are attached to the rear end of males and to the front end of females. When mating, the male approaches the female from behind and clambers onto her back; a transmitter attached to the rear of her shell would possibly interfere with mating. Photograph: William K. Hayes. 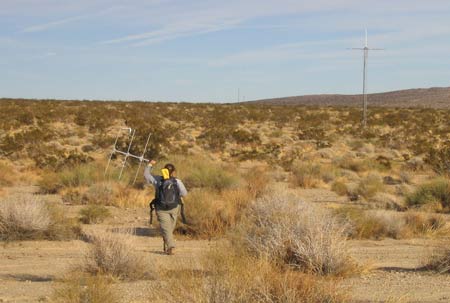 Two forms of technology. Meagan Harless relies on a handheld antenna and receiver to locate a tortoise the old-fashioned way—on foot. In the background, a permanently-mounted antenna—just one of many antennae within a grid—is continually picking up signals that are relayed to an automated data logger. Through changes in signal strength, the automated system can identify changes in tortoise activity on a minute-by-minute basis. Triangulation through multiple antennae within the grid also yields coordinates (of limited precision) for the location of each tortoise. Photograph: Courtney LaMere/USA-CERL Desert Tortoise Project. 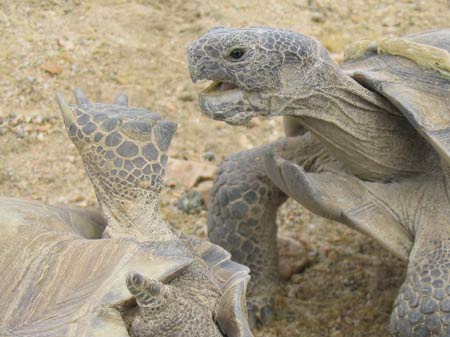 Take down! Male tortoises frequently vie with each other for an opportunity to mate. During sparring, one tortoise may be flipped upside down, as shown here. The winner gets the girl, while the loser often must arch his neck to right himself—and quickly, to avoid overheating in the sunlight. Photograph: USA-CERL Desert Tortoise Project. 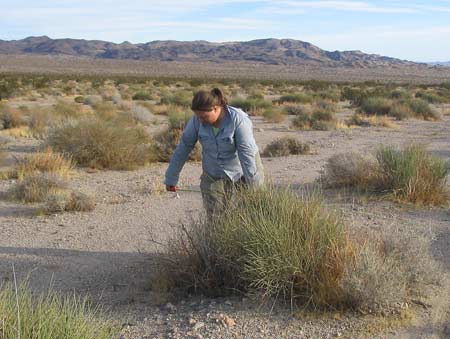 Assessing the habitat. Meagan carefully measures a shrub of the genus Ephedra (two species occur at the site). She and Andrew are exploring shrub-burrow associations and burrow orientation. Andrew hypothesizes that temperature and humidity influence decisions on where tortoises construct their burrows. Photograph: Courtney LaMere/USA-CERL Desert Tortoise Project. 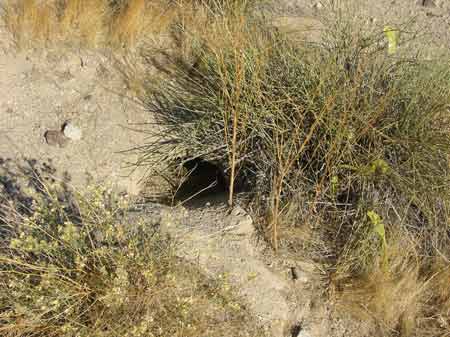 Speaking of burrows? Tortoises excavate their own burrows, usually beneath a shrub, leaving a distinctive, dome-shaped entrance. Essential for tortoises to escape unfavorable temperatures and to conserve energy and fluids, the burrows also provide a haven for numerous other animal species—far more, according to Meagan and Andrew's data, than previously recognized. Photograph: William K. Hayes. 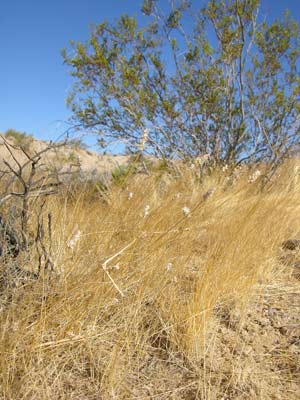 No substitute for the real thing. The grass shown here, of the genus Schizmus, is one of many invasive plant species that has been introduced to the Mojave Desert. At many locations, including the Ft. Irwin study site, native grasses have been outcompeted by foreign grasses. Tragically, some of the new grasses require substantially more water to digest, which upsets the tortoise's water balance and leaves it especially vulnerable during drought years. Photograph: William K. Hayes. 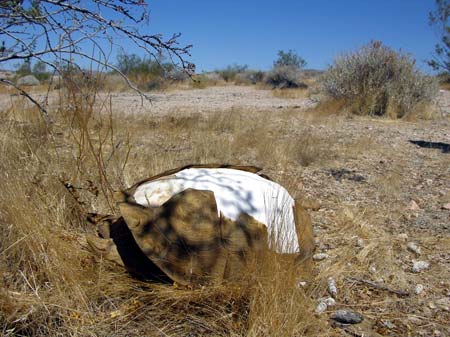 A sad reminder. Until we figure out how to coexist with tortoises and other imperiled species, we may have little more than bleached remains to remind us of the fascinating creatures that once made the desert their home. Photograph: William K. Hayes.