Research on Behavioral Ecology and Conservation of Bahamian Seabirds (with photographs)

The Bahamas boast of some 700 islands scattered across roughly 100,000 square miles of Atlantic Ocean. The tropical climate, endless beaches, abundant reefs, and unique wildlife prove irresistible to many tourists and bird lovers alike. However, one of the best kept ornithological secrets is San Salvador Island, the island that Christopher Columbus is believed to have first set foot on. Because of the island's relatively pristine state, the seabirds of San Salvador are absolutely spectacular. The offshore cays, main island bluffs, and interior lakes support some of the largest breeding colonies of seabirds to be found anywhere in the Bahamas.

Here, I describe some highlights of our work with San Salvador's seabirds. However, none of the work would have been possible-and I want to acknowledge this-without the support of a remarkable institution, the Gerace Research Center (GRC). We feel blessed to work here, as few "base camps" can compare with the GRC's excellent facilities, friendly management, and relative ease of access to exceptional study sites. This institution, no doubt, has done more than any other to promote environmental studies in the Bahamas.

However, as much as we enjoy returning each evening to a delightful meal, a welcome shower, and the company of other scientists and students, we often forfeit these pleasures to camp out instead on the offshore cays. Our work with both the seabirds and iguanas often requires this of us. Even so, what could be better than falling asleep to the rhythmic pulse of the ocean's waves, the pale light of the moon caressing the lunar-like rockscape, the incessant squawks and screams of squabbling seabirds, the ominous boom of an approaching thunderstorm, the hypnotic whine of a thousand mosquitos outside your tent, the piercing bites of no-see-ums that squeeze through your netting...?

Yeah...it's the life, alright! Who wouldn't want to be a biologist?

Remarkably, San Salvador hosts 14 (82%) of the 17 seabird species that breed in the Bahamas (see Table below). This number does not include a pair of Masked Boobies that I observed courting but could not confirm nesting in 1998. The number of seabird species breeding here exceeds that of any other locality in the Bahamas. Eight of these species are of special concern because of declining numbers in the West Indies region and their vulnerability to extinction. For some species, such as Audubon's Shearwater and Double-crested Cormorant, a substantial fraction of the entire West Indies population breeds on San Salvador Island.

The fragility of San Salvador's seabird populations can be better appreciated from a broader perspective. Globally, seabirds are declining at an alarming rate. Approximately 20 percent of the world's seabird species are threatened by extinction. The loss of seabirds on tropical islands due to human disturbance has been estimated at a staggering 90 to 99%. Several life history attributes render seabirds especially vulnerable. These include nesting in high density at few sites, small clutch sizes, prolonged nest occupancy because of slow chick growth, and slow maturation. As a consequence, seabirds are slow to recover from population declines. Increased development of coastal sites exacerbates the primary threats, which include habitat destruction, colony disturbance, exotic predators, pollution, and egg collecting.

I have been monitoring San Salvador's seabird populations since 1993. The largest breeding colonies occur on offshore cays (small islets pronounced as "keys"), with up to nine species nesting on a single cay. Additional populations occur in the inland lakes, where substantial numbers of herons and other waterbirds also nest. Several seabirds nest on the rocky bluffs of the main island, including Audubon's Shearwater and White-tailed Tropicbird. The offshore cays, inland lake habitats, and rocky bluffs all need to be protected from development. The mangrove estuaries and coral reefs that provide food for the birds will also need protection.

Will San Salvador's spectacular seabirds persist? In spite of significant recent storm damage to some offshore cays (particularly White and Gaulin Cays), the seabird populations presently appear to be large and viable. Nevertheless, dramatic declines have been documented in other regions of the Bahamas, and large-scale development looms on the horizon for San Salvador. Unless the seabirds receive significant protection, such as inclusion of critical habitats within the Bahamas National Park System, they may one day disappear, much as the did the Lucayan Indians that eagerly greeted Columbus upon his arrival.

To learn more about San Salvador's seabird spectacle, you can read my recent article from Bahamas Journal of Science (PDF). You can also scroll down to the photograph section below.

The Audubon's Shearwater has been the subject of focused research since 1999. Graduate student Tony Trimm and I have found nesting colonies of this bird on virtually every offshore cay of San Salvador Island. Motoring between cays at night through coral-studded waters really gets the adrenaline going. More recently, we discovered colonies on the rocky coastline of the main island itself. As many as 500 pairs may be present, comprising as much as 10 percent of the entire West Indies region population. Highly pelagic, these shearwaters visit land only to breed. They prefer to nest in rocky burrows where they lay their single egg. Both parents share in incubation and chick-rearing responsibilities. Once the chick has hatched, the parents feed at sea by day and return at night to tend their chick. Hearing their eerie calls at night is an unforgettable experience.

Tony has studied nest (burrow) microhabitat variation, vocalization behavior, nest attendance and arrival time of adults, chick activity in relation to time of day and age, and effects of microhabitat and weather on chick growth. We will soon post some of the results of his studies. 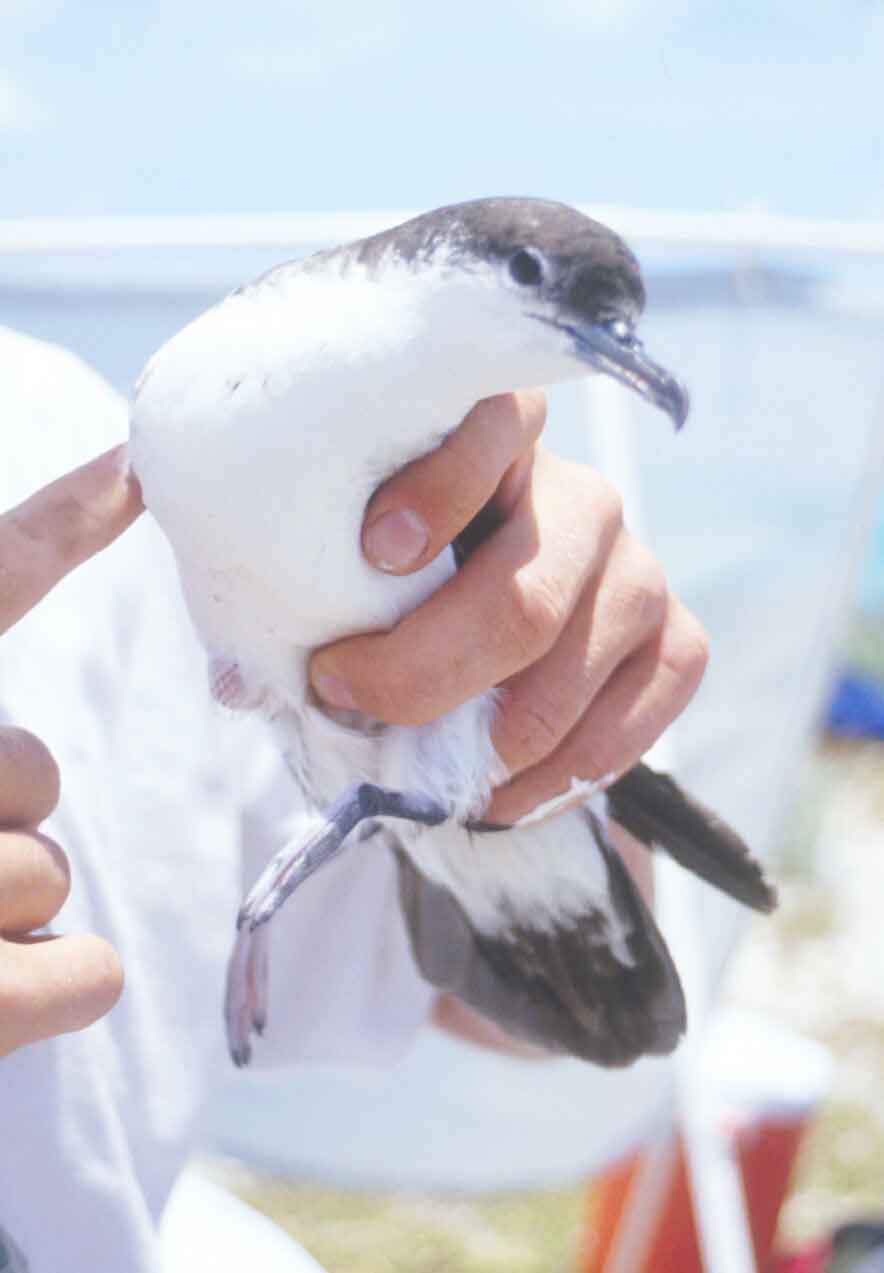 Audubon's Shearwater (Puffinus lherminieri). This highly pelagic bird feeds far out at sea by day and returns to its nest at night to feed and care for its young. We conduct surveys at night, when the birds call readily from their nest burrow (usually in a rocky crevice), especially in response to audiotape playback. Photograph: William K. Hayes. 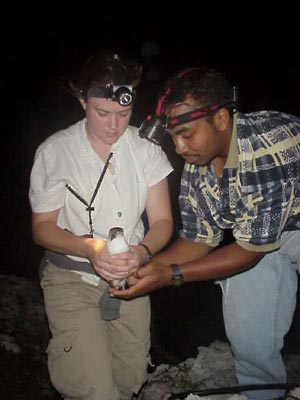 Careful! Graduate students Naomi Balduff Johnson (left) and Tony Trimm (right) cautiously admire an adult Audubon's Shearwater. These birds LOVE to inflict painful bites! Tony studied this species for his Master's degree, and has continued to work on it for his Ph.D. dissertation.Photograph: Ronald L. Carter.

Although photographs can never do a bird justice (with the possible exception of the aptly-named European Starling, Sternus vulgaris; think Latin...), I have posted some images here with some very basic comments on the biology of each species. I hope you will enjoy them! 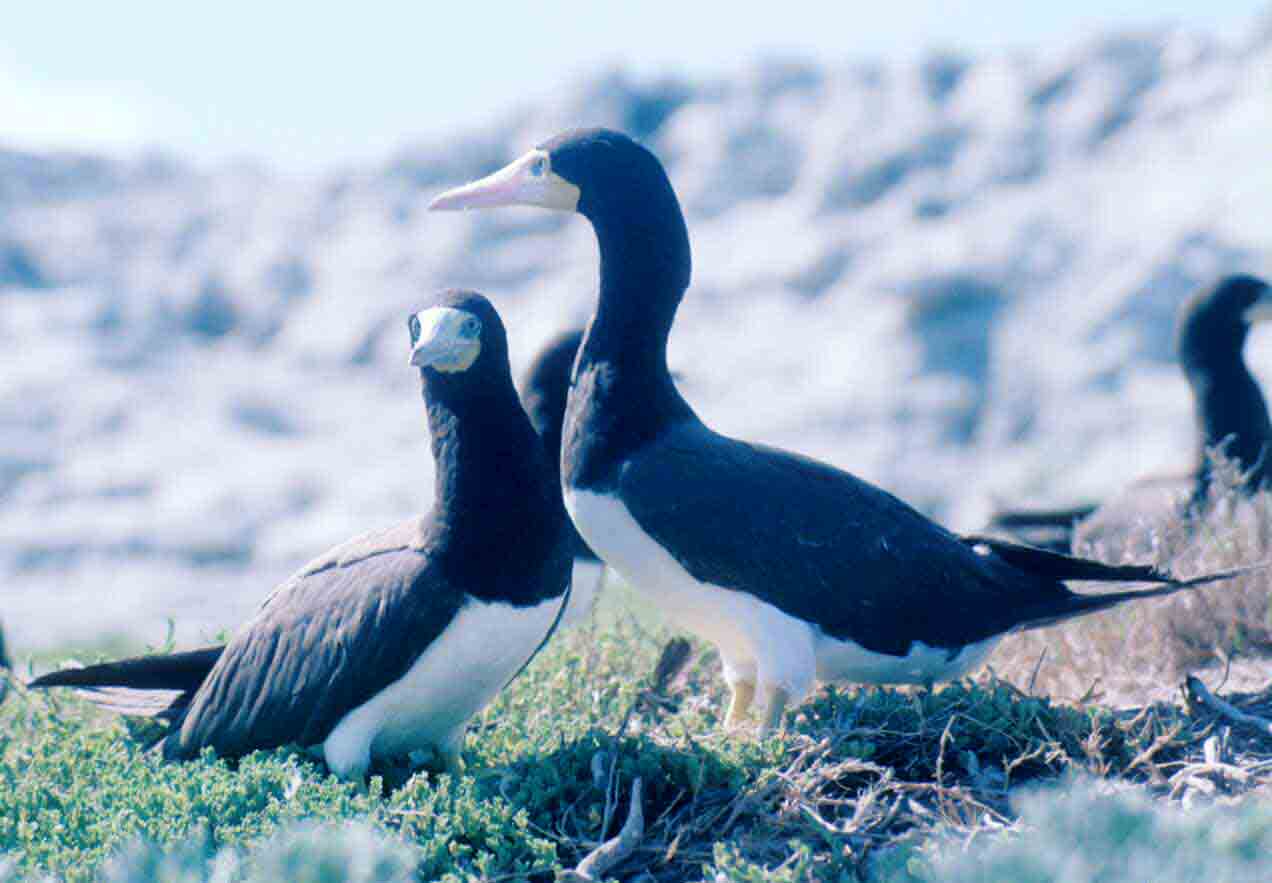 Brown Booby (Sula leucogaster). Two hundred or more pairs nest on White Cay and Catto Cay, apparently year-round. They generally feed well out to sea and, other than on an island they nest, are rarely seen from land. Photograph: William K. Hayes. 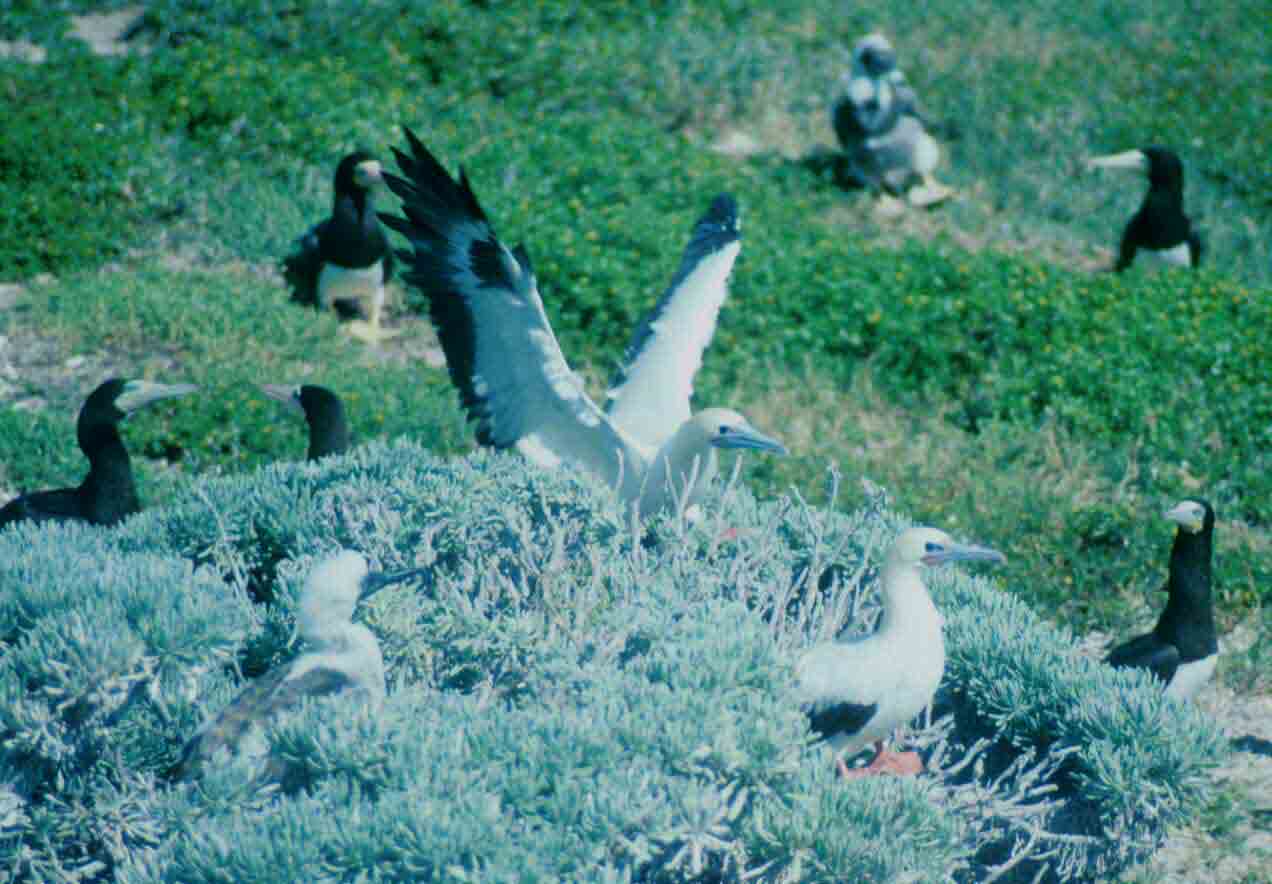 Red-footed Booby (Sula sula). In contrast to the ground-nesting Brown Boobies (in background), the Red-footed Booby nests in vegetation (note the chick in the bush). A single pair of white-phase birds began nesting on White Cay in 1995 (shown here), representing the northernmost colony in the world. Two pairs were present in 1998 and in most years since, although vegetation damage from Hurricane Floyd (September 1999) has forced relocation of the colony to nearby Catto Cay. In recent years, a brown-phase adult has paired with a white-phase adult (both color morphs have red feet). Photograph: William K. Hayes. 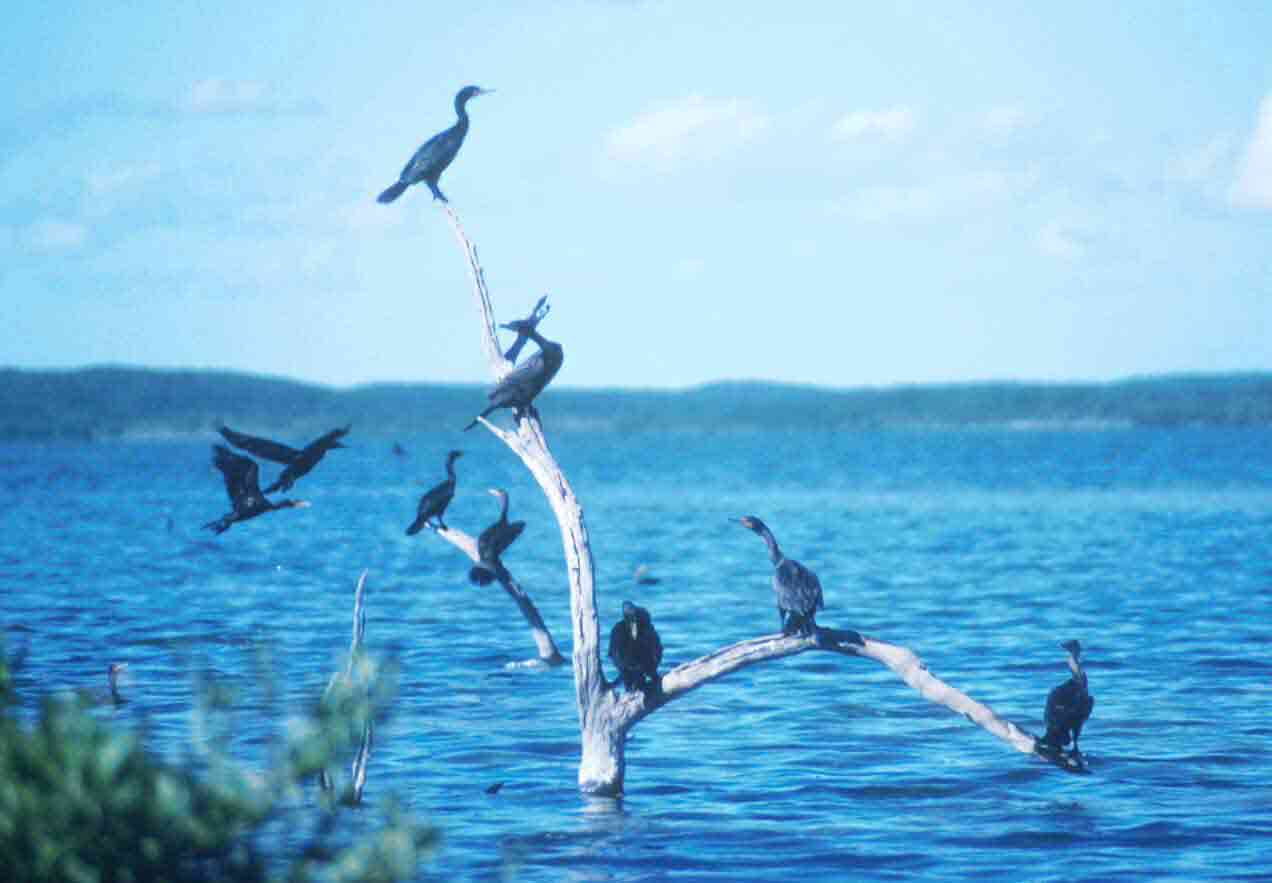 Double-crested Cormorants (Phalacrocorax auritus). Several hundred cormorants live year-round in the hypersaline inland lakes, feeding on several species of small fish. They rarely venture to the open coast and ocean waters (though I believe I am seeing an increase in this behavior). Diminutive in size, the endemic West Indies form is now considered a distinct subspecies (P. a. heuretus). Photograph: William K. Hayes. 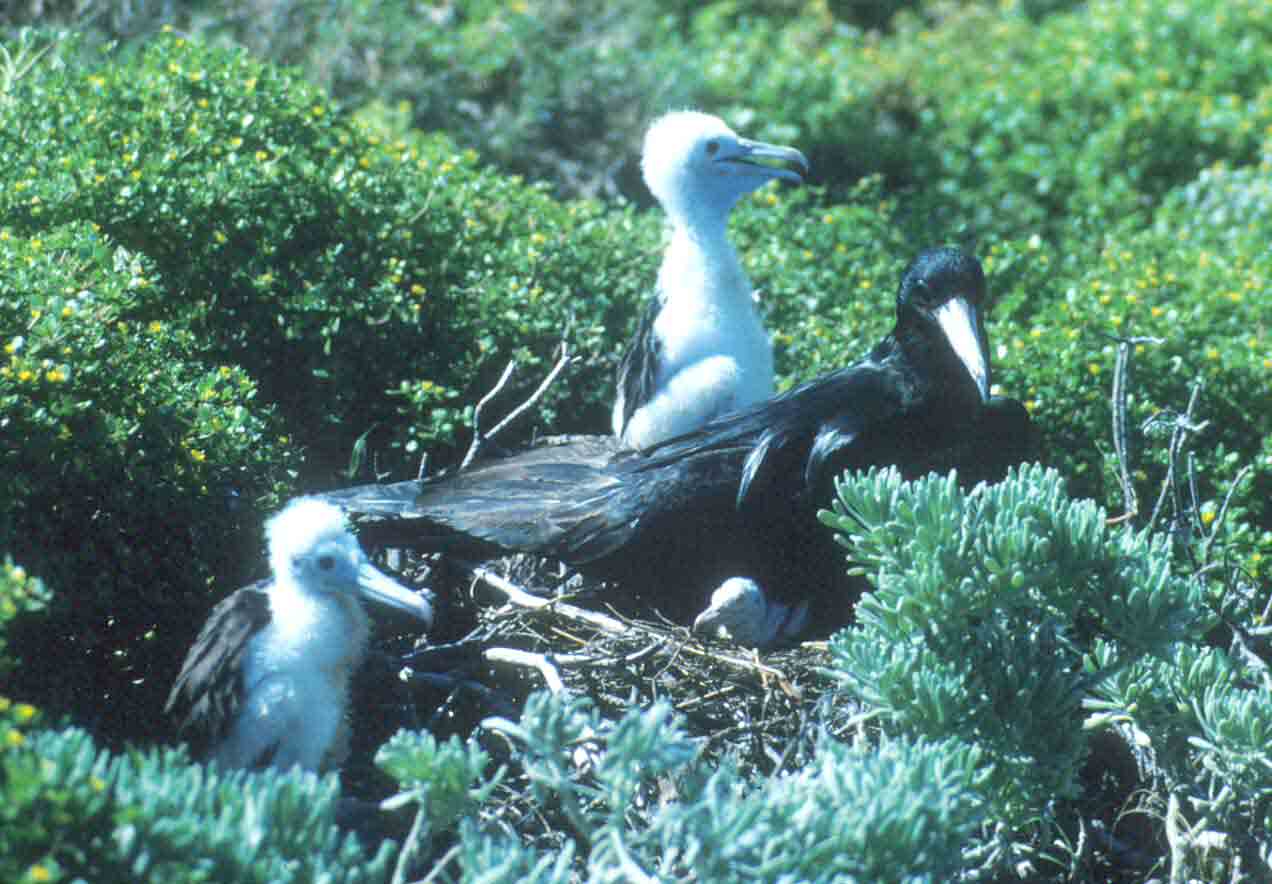 Magnificent Frigatebird (Fregata magnificens). Pirates of the sea, Frigatebirds are notorious for their frequent kleptoparasitism of other birds. Like Red-footed Boobies, they prefer to nest in vegetation. Although most continue to nest in the dead stubs left behind by Hurricane Floyd on White Cay, one pair moved to Catto Cay in 2003, possibly the vanguard for others in the future. Females apparently do not breed annually; hence, more adults probably breed here than is apparent during annual surveys. Photograph: William K. Hayes. 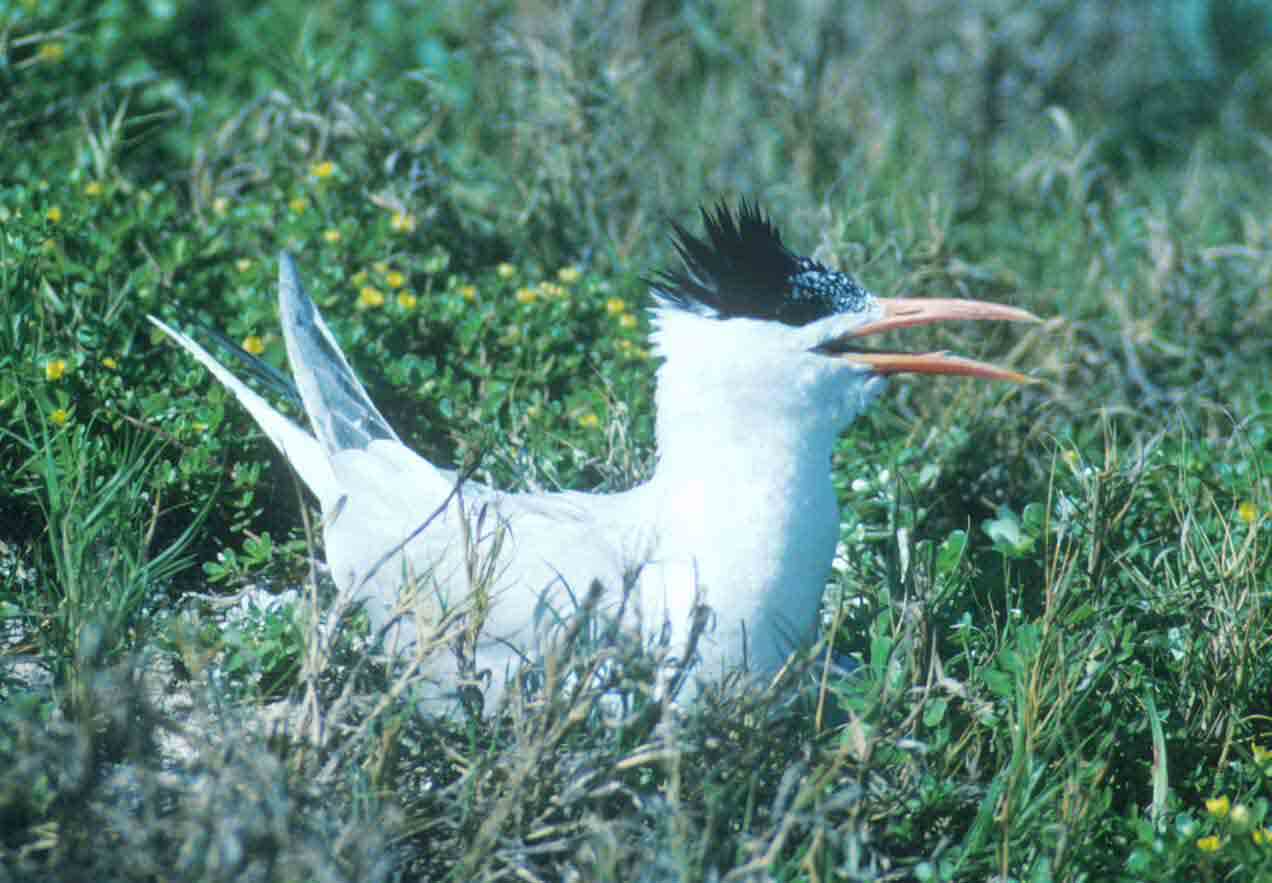 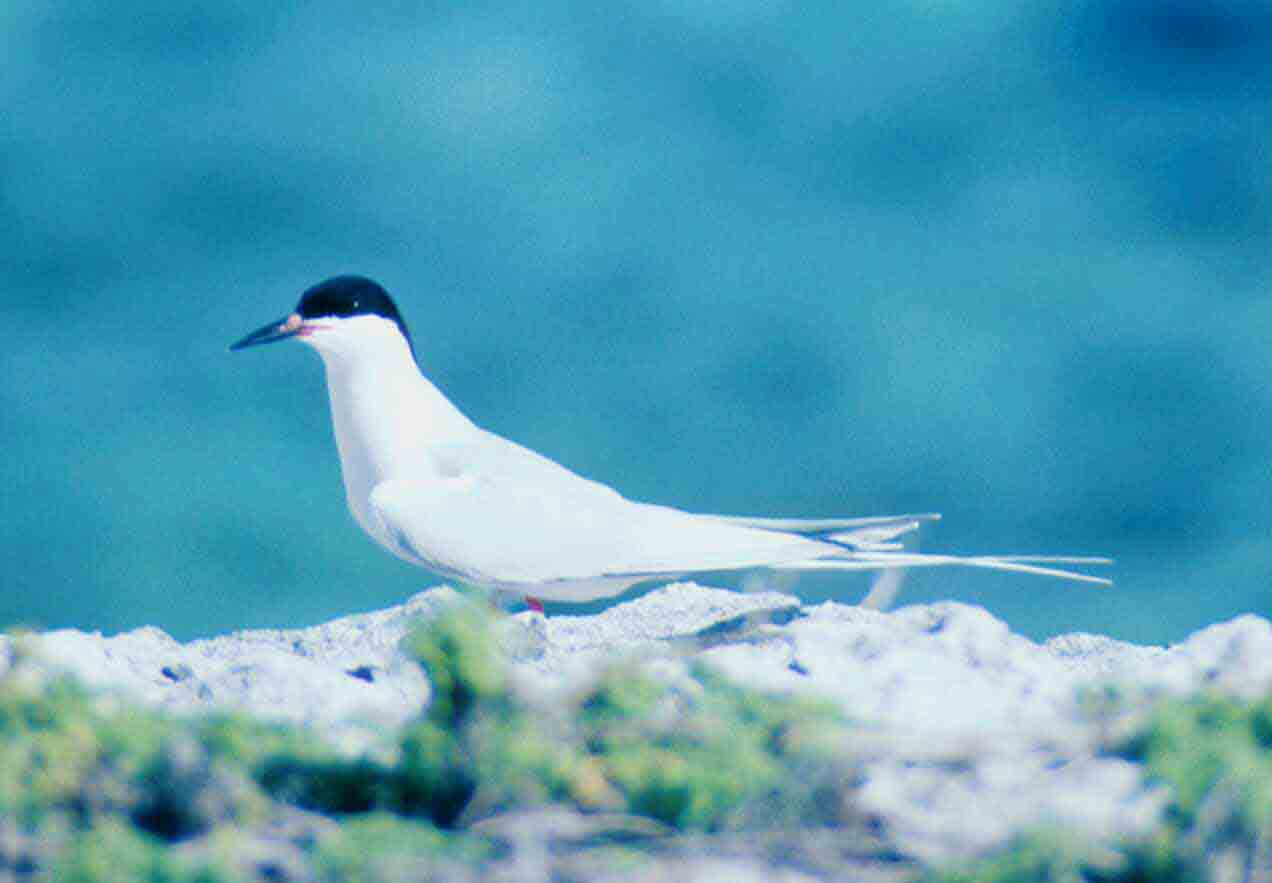 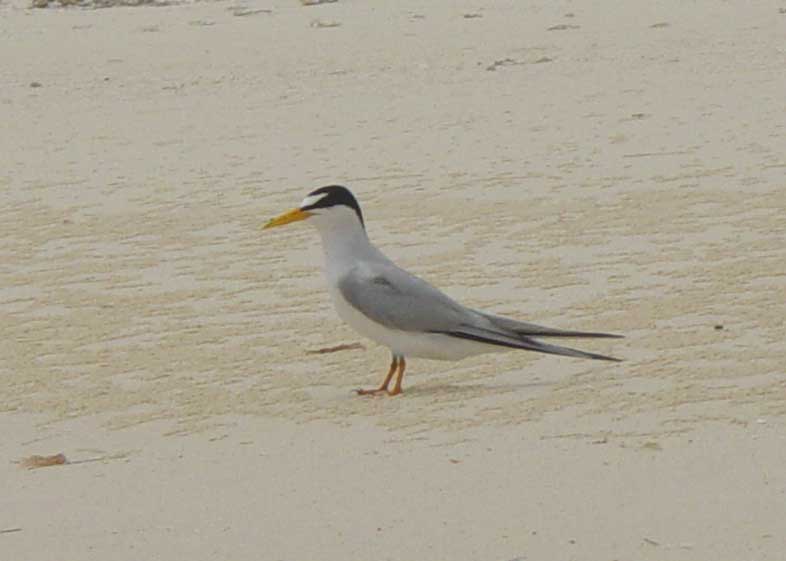 Least Tern (Sterna antillarum). The smallest of the terns, this species nests both on the offshore cays and in the inland lakes, where it captures fish in shallow water. To get this photo, my wife and I slowly crawled along the shallows (with only heads and camera above water) to within a few feet of the beach it was resting on. We are much less threatening in the water (no, don't even think it; we do NOT resemble beached whales!). Photograph: William K. Hayes. 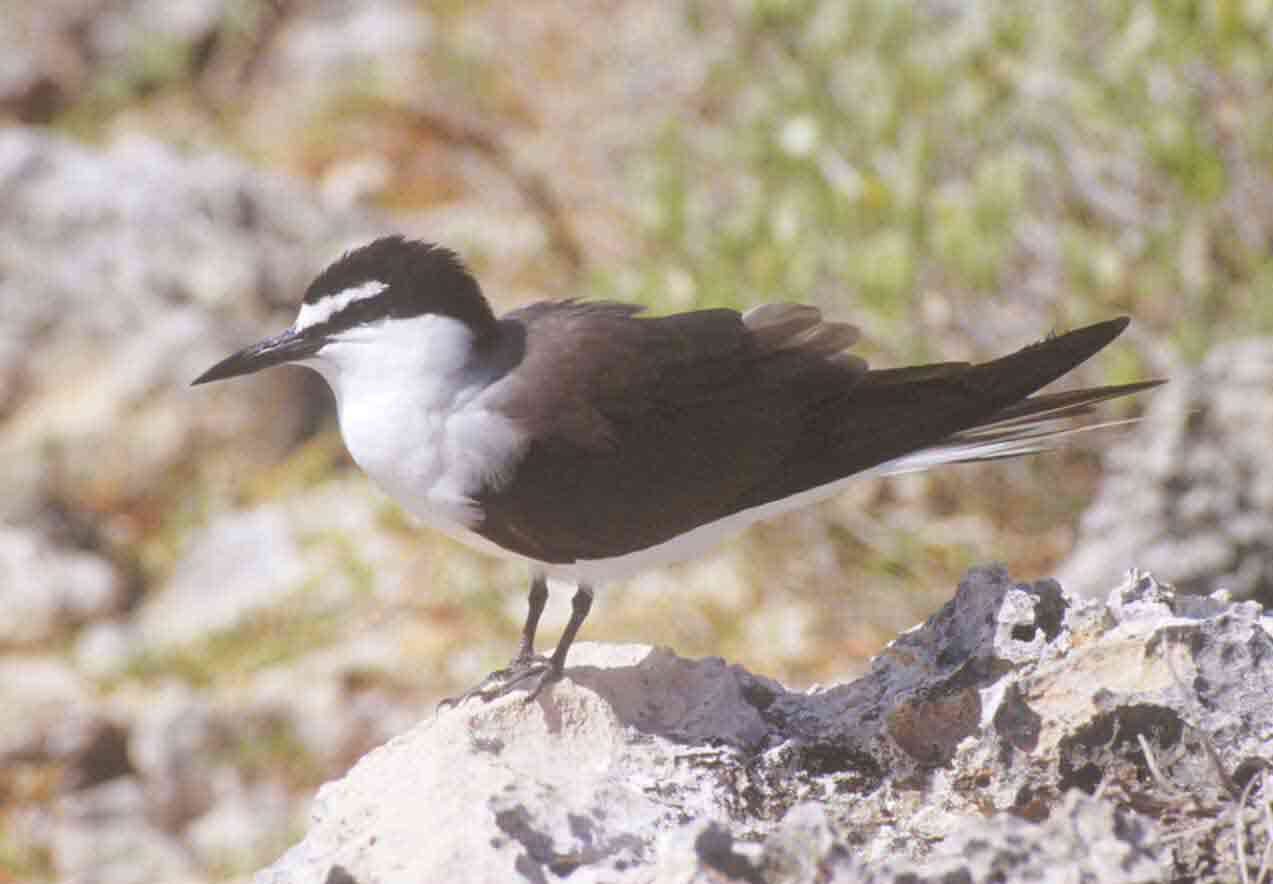 Bridled Tern (Sterna anaethetus). An elegant bird that nests in small, loose colonies on most offshore cays and feeds well offshore. Like the Audubon's shearwater, it prefers to nest in a rocky crevice. On cays with iguanas present, we often see these terns swooping at their nemesis. Although largely vegetarian, the iguanas do sometimes feed on small birds, including (we believe) tern chicks. Photograph: William K. Hayes. 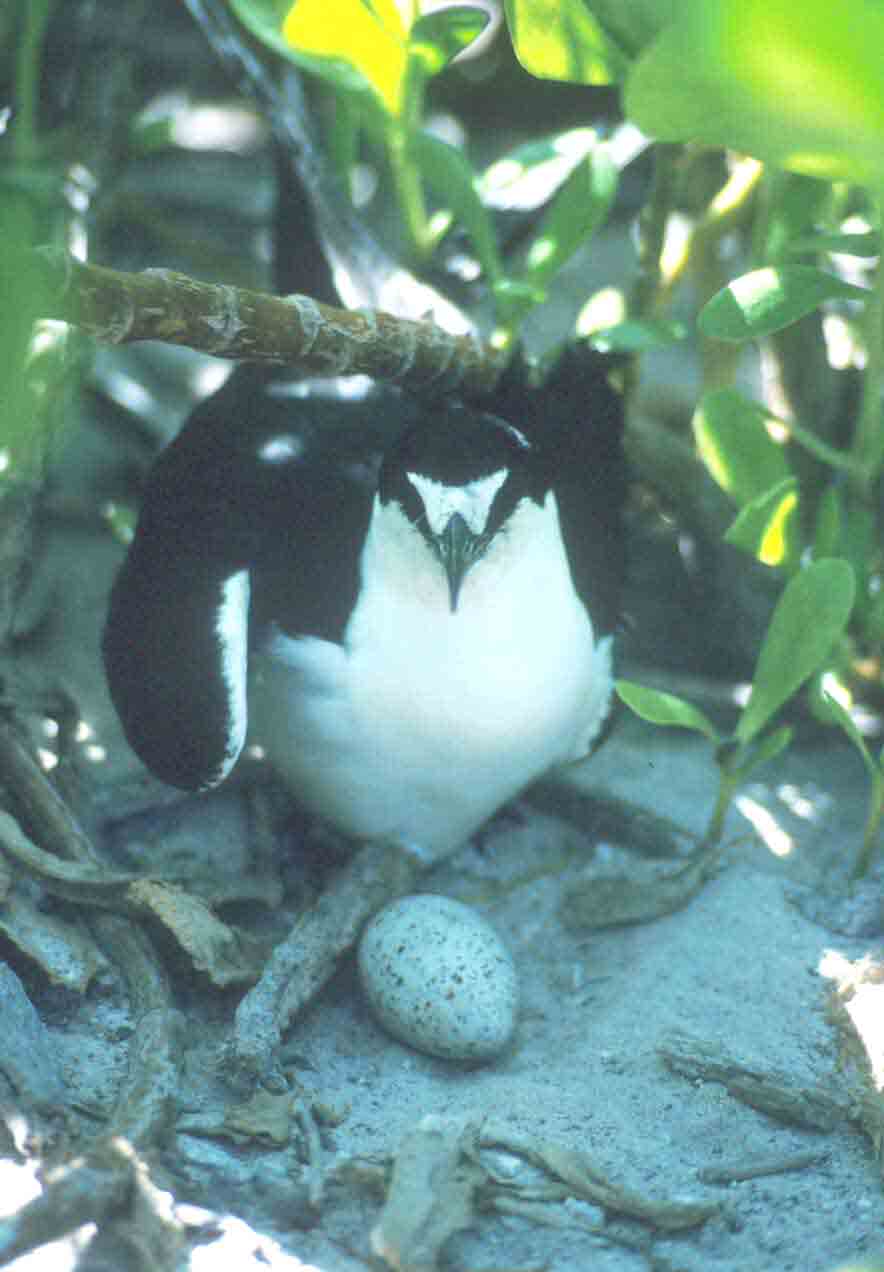 Sooty Tern (Sterna fuscata). This bird forms enormous, dense colonies on a few offshore cays. It feeds well offshore. Due to hurricane-related loss of habitat on White and Gaulin Cays, I suspect that numbers have declined in recent years. Photograph: William K. Hayes. 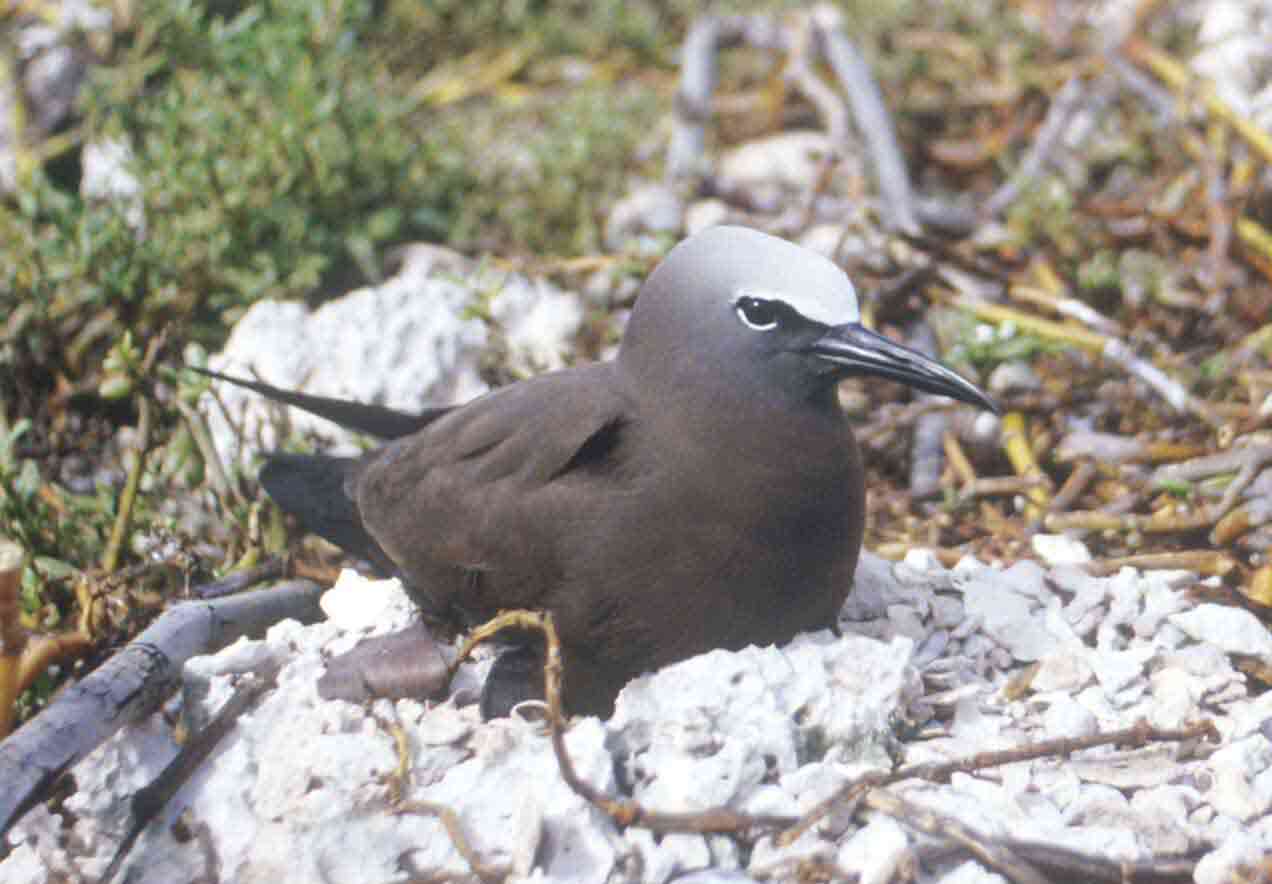 Brown Noddy (Anous stolidus). This elegant tern also nests in dense colonies and feeds well offshore. They are so photogenic, one can hardly resist a close approach. However, eggs and chicks are highly vulnerable to the tropical sun, and we restrict our visits to the colonies to the early morning and evening hours. Photograph: William K. Hayes.