The Large-billed Savannah Sparrow (Passerculus sandwichensis rostratus) is a "species of special concern" in California. During spring, it breeds in the marshes along the northern and northeast coasts of the Gulf of California. During winter, it disperses widely to coastal regions of southern California and the Baja penninsula. Earlier this century, this bird wintered abundantly in southern California's coastal marshes. However, numbers have dwindled dramatically in recent decades, coinciding with the loss of wetlands at the Colorado River delta. The wetlands have declined because virtually all of the water is siphoned out of the Colorado River before it reaches the Gulf of California.

Fortunately, numbers of wintering birds in California appear to be on the upswing, especially at the Salton Sea. This large body of saline water in southeastern California formed when an aqueduct supplying Colorado River water to Los Angeles ruptured in 1905. By the time the rupture was repaired, an enormous body of water had accumulated, and this has been maintained since by agricultural runoff. More and more sightings are also being reported from the coast.

So how did I get into a project involving these sparrows? It's all Stacy Peterson's fault. He and I often birded together, and we co-taught a course on Biology of Birds at Loma Linda University. Stacy is also author of the Salton Sea account for the ABA Guide to Birdfinding in Southern California. In 1997, when we were discussing options for bird research, he pointed out the lack of knowledge regarding this sparrrow and its conservation status in California. Why not focus on this bird, he suggested? It seemed like a good idea to me! So off we trudged (and I mean trudged) to the Salton Sea.

Initially, we conducted extensive surveys on foot, trudging dozens of miles through unimaginable slop and muck along the Salton Sea shoreline and along secondary bodies of water adjacent to the shoreline. We also explored nearby agricultural fields, freshwater marshes, and desert scrub habitats. We soon learned where the Large-billed Savannah Sparrows  were most common and in what habitats we encountered them most. Nearly all of these birds are found in the southern half of the Salton Sea, where they clearly prefer emergent vegetation (iodine bush, saltbush, and/or young tamarisk) along the primary shoreline and along secondary bodies of water adjacent or very close to the shoreline. However, a number can also be encountered along rocky shorelines. An interesting dichotomy!

In January 2002, we began banding sparrows. Stacy had finally acquired his long-sought-after banding permit. We found the going very tough, and managed to band only 19 birds in the first year. What we needed desperately were more nets and more volunteers to flush the birds into nets. Fortunately, we were able to deliver on both accounts. In January 2003, we helped Stacy capture a whopping 78 birds, of which two were recaptures from the previous year. In January 2004, we captured 30 birds, of which two were recaptures from 2003 and one a recapture from 2002. Nice work! Curiously, all recaptures were in remarkably close proximity to their original capture location. Continued banding in subsequent years will tell us more about survivorship, population size, and winter site fidelity.

Eventually, if and when funds become available, we hope to expand our work. For example, we'd like to learn more about the bird's feeding habits and winter home range size, and how these vary with habitat preference. Because the Salton Sea shoreline will be highly dynamic in the years to come, as water levels change due to revised irrigation and habitat management practices, we will need to know what is going on with this cute little bird and what its future will be at the Salton Sea. We hope that our work will draw attention to its fate and somehow improve its future. 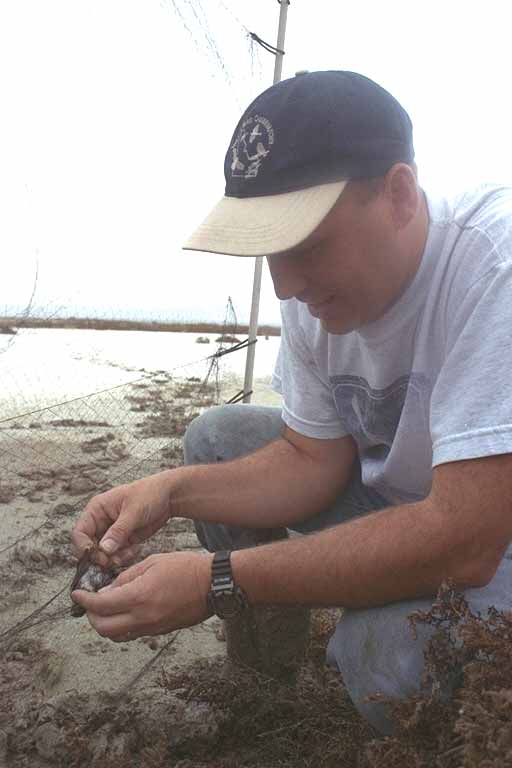 Captured! Stacy Peterson, a fine friend and colleague, removes a Large-billed Savannah Sparrow (Passerculus sandwichensis rostratus) from one of the mist nests set up at our Salton Sea, California, study site. This bird breeds in salt marshes of the Gulf of California, Mexico, and disperses widely to coastal winter sites (from southern California to the tip of Baja California). Though a "Species of Special Concern" in California, modest numbers now winter at the Salton Sea, a massive body of salt water formed from a 1905 irrigation accident and maintained by agricultural runoff. How many winter here? We are trying to answer to this question! Photograph: William K. Hayes. 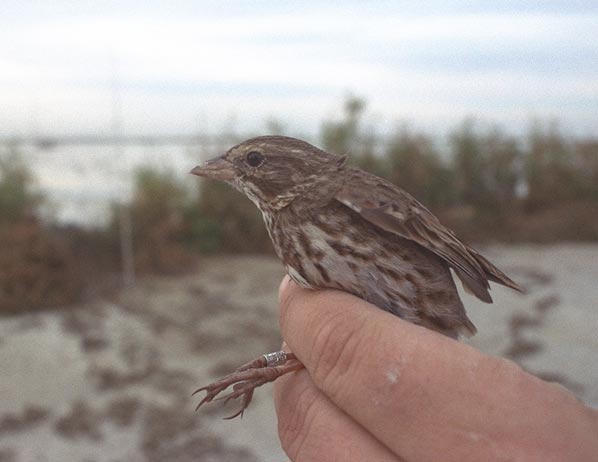 A bird in the hand... This Large-billed Savannah Sparrow now sports a U.S. Fish and Wildlife Service band on one of its legs and is ready to be released. With the bird in hand, we collect basic data on its age, body size, and condition (amount of fat). Maybe it will be caught again next year, giving us valuable data on survivorship and winter-site fidelity. Eventually, we'd like to use radiotransmitters (if funds ever become available) to learn more about the bird's daily activities and winter home range size. Photograph: William K. Hayes. 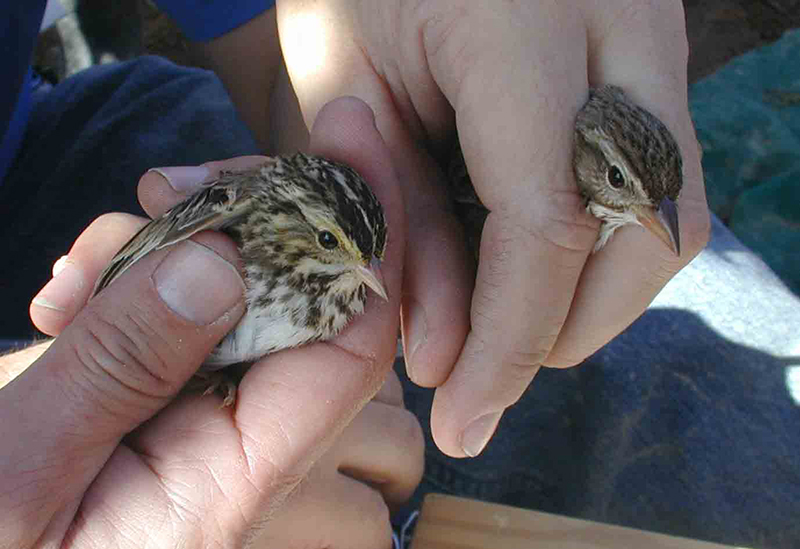 What's the difference? The bird to the left is a typical Savannah Sparrow (probably P. s. nevadensis). Note the smaller size, brighter yellow supercilium, and distinctly smaller bill. The bird on the right is a Large-billed Savannah Sparrow (P. s. rostratus), with a larger body, duller coloration, and much larger bill. Photograph: Shelton S. Herbert. 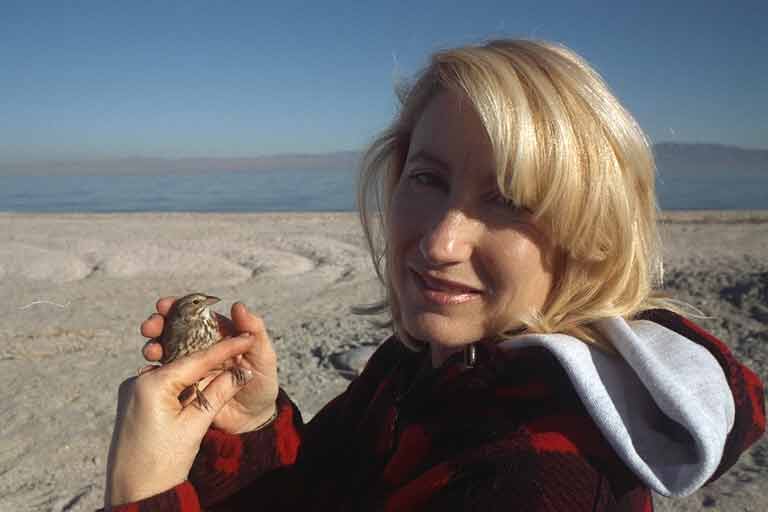 Beauty and the...bird. My lovely wife (Pat Barry) shows off a sparrow captured at a nearby rock jetty. Our extensive population surveys indicate that Large-billed Savannah Sparrows prefer emergent vegetation (iodine bush, saltbush, and/or young tamarisk) associated with secondary bodies of water adjacent to the Salton Sea. However, some individuals frequent an altogether different habitat: rocky shorelines. We'd like to know whether habitat preference influences diet and other behaviors. Photograph: William K. Hayes. 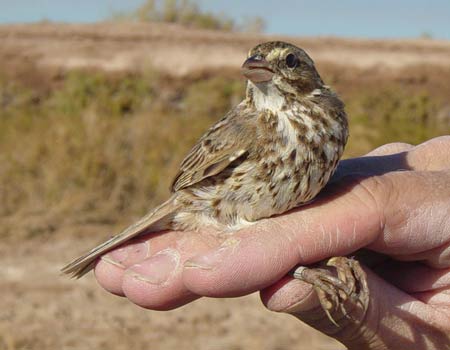 Recapture! This sparrow, banded in 2002, was recaptured in 2004 within about 200 m of its original capture site. Our recapture data suggest high site fidelity in successive winters. Photograph: William K. Hayes. 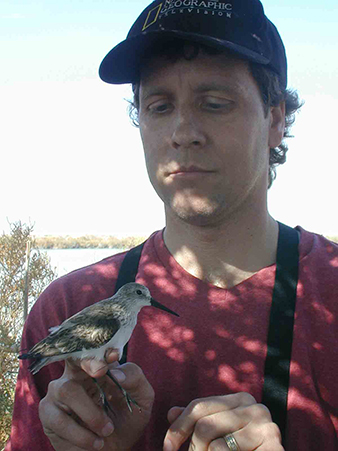 Bycatch... This creature is so adorable, I was told that I had to post it here. When mist-netting sparrows, we frequently catch other birds in the net, including this basic-plumaged Western Sandpiper (Calidris mauri). Personally, I think the bird is kind'a cute, too! (Okay...bad joke.) Photograph: Shelton S. Herbert. 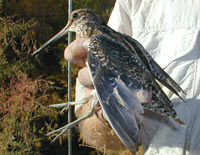 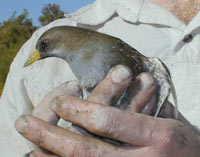 More bycatch. Even bigger birds will crash into our nets, including a common snipe (left) and a sora rail (right). It's fun to hold such marvelous creatures in the hand! And apart from some injury to their pride (I wish I could figure out how to quantify this), no harm is done. Photographs: Shelton S. Herbert. 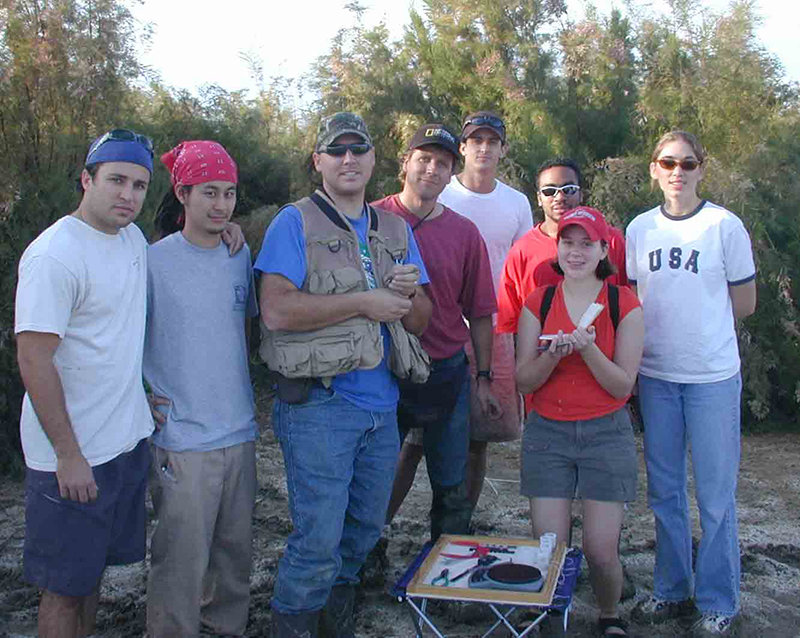 2003 Bird-banding team. Thank God for grad students; who else could I compel to wade all day through a quagmire of weeds and mud, chasing little brown birds into nets?! From left to right (and the subjects they normally study): Eric Dugan (rattlesnakes), Jeremy Johnson (hermit crabs), Stacy Peterson (licensed bird bander and former student of another institution), me (whatever strikes my fancy), Chris Rodriguez (undergraduate biology at another institution), Tony Trimm (Audubon's Shearwaters), Naomi Balduff Johnson (Bahamian iguanas), and Amy Utt (California Condors). Not pictured: Scott Herbert (behind the camera; venomous snakes) and Pat Barry (had to work on this day; not a student). Photograph: Shelton S. Herbert. 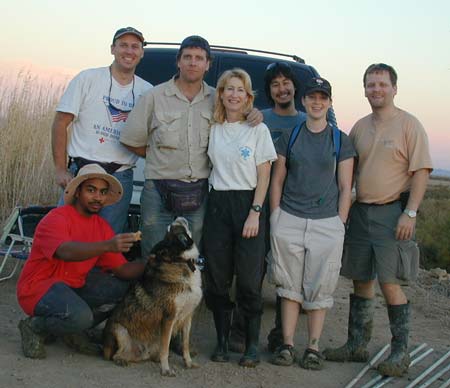 2004 Bird-banding team. We had less help this year. From left to right: Tony Trimm, Stacy Peterson, me (the taller, less hairy one), Pat Barry, Jeremy Johnson, Naomi Balduff Johnson, and Scott Herbert. Did I forget to mention Max, the hairy one ignoring Tony and looking with longing into my eyes? I have a way with animals... Photograph: Shelton S. Herbert (with automatic timer).

Stacy and I are also taking the work in another direction. Some lines of evidence suggest that the Large-billed Savannah Sparrows are distinct from the "typical" Savannah Sparrows. However, intermediate forms can be found nesting in the marshes of Baja California. These, in turn, represent the southern end of a cline including other saltmarsh-nesting sparrows in which bill size increases dramatically as one moves from central California to southern Baja. Some eight subspecies are currently recognized in this saltmarsh group (see map, below). 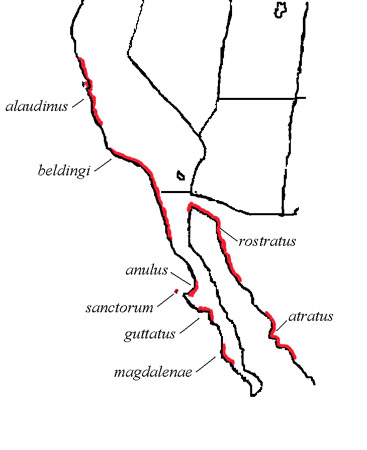 To better understand the taxonomic validity of these groups, we are studying the morphological characters of each subspecies using museum specimens. To evaluate our data, we rely on a statistical procedure called Discriminant Function Analysis. This test considers the variance in a set of characters and then objectively assigns (or diagnoses) each individual to a defined (taxonomic) group. If two different populations are considered, for example, and at least 75% of the individuals within each can be correctly assigned by this procedure, then the two groups would be considered distinct enough to represent separate subspecies based on the 75% diagnosis rule (Patten and Unitt, 2002, Auk 119:26-35). If there was 100% diagnosis of both groups, they could be regarded as separate species.

In our preliminary assessment, it looks like most or all of the saltmarsh groups indeed represent valid subspecies. Our morphological data further suggest that the two groups with the largest bills, rostratus and atratus, are distinct from those on the Baja penninsula (beldingi, anulus, guttatus, magdalenae). The isolated populations of sanctorum on the San Benito Islands, which likewise have large bills, are also fairly distinct (though less so) from the Baja penninsula forms. In contrast to the other Mexican groups, sanctorum is non-migratory and lives in desert habitat more closely resembling that occupied by the Black-throated Sparrow (Amphispiza bilineata). There are no marshes available on these islands! Thus, the saltmarsh forms may be represented by as many as three distinct species. 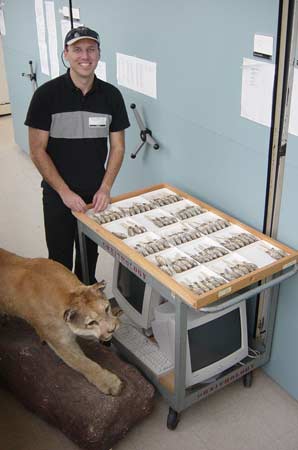 Birds and beasts. Stacy Peterson grins with delight at having the opportunity to examine study skins at the Los Angeles County Museum of Natural History. A mountain lion sniffs with curiosity at the scent of something potentially edible... Photograph: William K. Hayes.

Given the overlap in morphological characters between groups (see J. Rising, 1991, Studies in Avian Biology No. 23., Publ. Cooper Ornith. Soc.), additional studies will be needed to further clarify taxonomic relationships. We understand that others are presently working on a molecular analysis. Even so, our work will add to the body of total evidence by which we can draw conclusions regarding the group's taxonomy.

The question of species status is important considering the paradigm most frequently used in setting conservation priorities. Conservation authorities confer highest priority to evolutionarily significant units (ESUs), which are, in essence, full species. Even so, subspecies and genetically-distinct populations can receive a lower priority status, that of management units (MUs). We have good reason to be concerned about the future of the marshes required by most of these sparrows. Coastal development, oil spills, rising sea levels, and consumption of freshwater that feeds many of these marshes threaten the sparrows as well. A better understanding of the taxonomy of this group may offer a compelling reason to protect some of these fragile habitats.

And...if for no other reason...we enjoy studying these birds just to learn more about their unique biology. We appreciate their delicate beauty and hope that something we learn can help assure their lasting presence!