Since 1993, I have been studying the endangered Bahamian rock iguana, Cyclura rileyi, in collaboration with Dr. Ron Carter (Loma Linda University). There are seven additional rock iguana species in the Caribbean, all of which are highly endangered and protected by international law. Three of these species occur in the Bahamas, where they are also protected by Bahamian law. The demise of these lizards, the largest native terrestrial herbivores on the islands where they occur, can be attributed wholly to activities of man. They are vulnerable especially to habitat destruction and the introduction of feral predators and competitors. John Iverson's research in the early 1970's, for example, documented that on one cay in the Turks and Caicos Islands, a population of 5,000 adult iguanas was completely decimated within five years by a mere handful of dogs and cats brought to the island by hotel workers.

Three subspecies of Cyclura rileyi are currently recognized, all of which are highly photogenic. Although they once enjoyed a wider distribution, all surviving populations are restricted today to small, remote islands that are difficult to access. We have captured and marked a high percentage of animals from all populations. We have also obtained blood samples from these animals that, in addition to their use in genetics studies, can be used to prove (by DNA fingerprinting) the source of any animals illegally smuggled from their native homes.

The purposes of our research are: 1) to assess current population size of each population; 2) determine heterozygosity (genetic variation) of each population; 3) evaluate morphological and genetic relationships between populations and subspecies; 4) assess current threats to long-term survival of each population and subspecies; and 5) attempt habitat restoration (e.g., rat eradication, nest habitat replenishment, removal of non-native plants) when appropriate. Additionally, we are conducting extensive studies of behavioral ecology, focusing on reproduction, feeding, activity, and home range. Because introduced rats now abound on a number of the cays (small islands pronounced "keys") where iguanas live, we are also studying their potential predation on iguanas and means of eradicating them.

You can read more about the findings of our research in two articles (Carter and Hayes, 2004; Hayes et al., 2004) published in the peer-reviewed volume, Iguanas: Biology and Conservation (A. C. Alberts et al., Editors, 2004, University of California Press; see UC Press description). I am also willing to give a talk, Big Lizards on Little Islands: Behavioral Ecology and Conservation of an Endangered Bahamian Rock Iguana, to interested audiences. 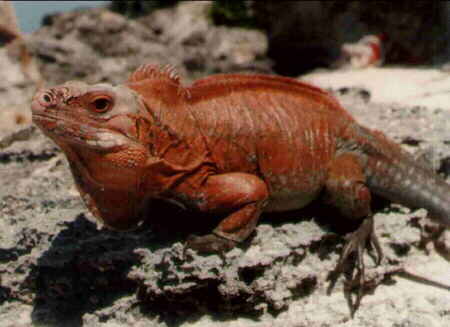 San Salvador Island Rock Iguana (Cyclura rileyi rileyi). This lizard is now confined to six tiny cays just offshore or within the hypersaline inland lakes of San Salvador Island, Bahamas. Our population estimates suggest that fewer than 600 remain. Introduced Cactoblastus moths are decimating Opuntia cacti, a major food source, and feral rats have been documented on three of the cays (we have eradicated the rats from one of these). Recent catastrophic storms (especially Hurricane Floyd in 1999) have inflicted damage on their habitats. Body size and color vary considerably from cay to cay. Photograph: William K. Hayes. 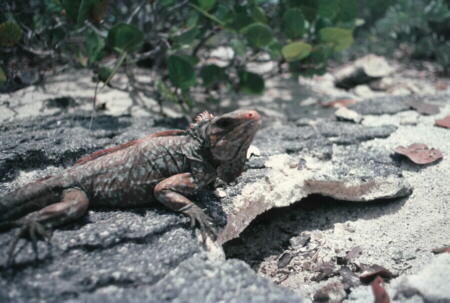 Acklins Bight Rock Iguana (Cyclura rileyi nuchalis). This lizard remains naturally on only two small cays west of Crooked and Acklins Island. Our studies suggest that at least several thousand remain on these cays. The populations appear to be healthy in the absence of introduced pests. An introduced population of about 300 animals is protected within the Exumas Land and Sea Park. Photograph: William K. Hayes. 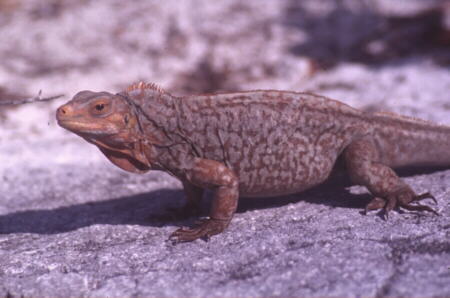 Sandy Cay Rock Iguana (Cyclura rileyi cristata). Confined to a single cay (also called White Cay) at the south end of the Exumas, this iguana numbers only in the hundreds. During our first visit to the cay in 1996 with Dr. John Iverson (Earlham College) and Sandra Buckner (Bahamas National Trust), we discovered numerous rats and a single raccoon on the island. Field data suggest that the raccoon killed several hundred iguanas between 1996 and 1997. Fortunately, the raccoon and rats have been eradicated and regular visits by us through 2002 indicate that the population is making a steady comeback. Photograph: William K. Hayes. 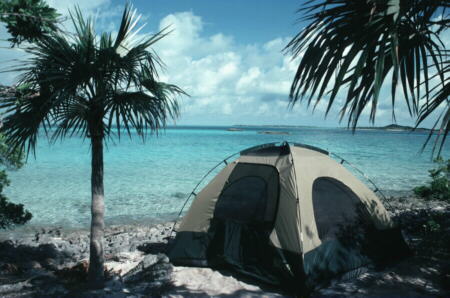 Tranquility. Despite the intense heat at midday and blood-sucking insects at night, camping in the Bahamas is not without charm. Photograph: William K. Hayes. 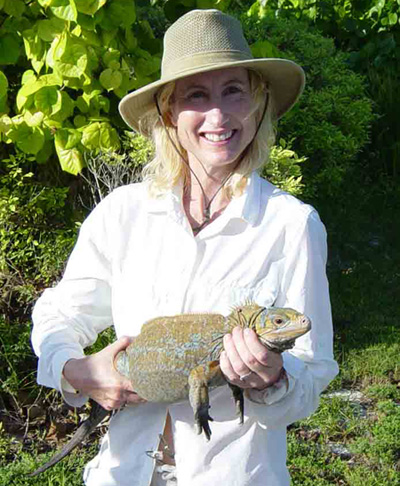 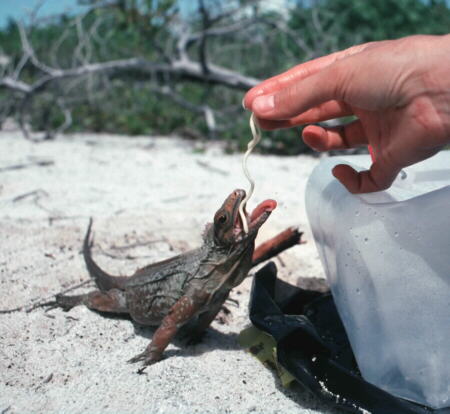 Handout! The iguanas near camp are intensely curious about us, and may clamber all over our gear. Although the iguanas are nearly strict vegetarians, on rare occasion we give in to their pleading and offer them a treat. Photograph: William K. Hayes. 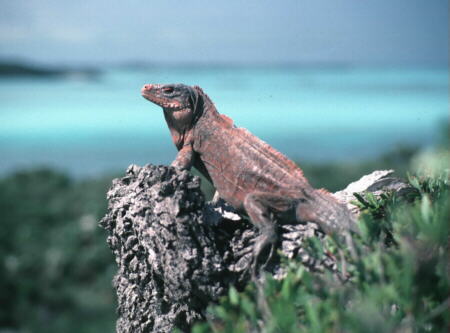 Taking in the scenery. Acklins Bight iguana basking in the sunlight, ever alert to the presence of an intruding iguana. Photograph: William K. Hayes.