Why do animals sleep? The answer to this seemingly simple question is anything but simple. A number of theories have been advanced, including the following:

Although sleep researchers have examined ecological correlates of sleep in a variety of endothermic vertebrates, the lower vertebrates (fishes, amphibians, and reptiles) have received considerably less attention. Regardless of why animals sleep, it seems clear that many attributes of sleep are carefully tailored to meet an individual's needs. For example, many animals select sleeping sites that afford the greatest protection from predation. Curiously, birds particularly subject to predation often sleep with only half their brain at a time (with the contralateral eye closed)!

Doctoral student Tim Revell has taken an interest in examining a number of ecological correlates of sleep in lizards. He has chosen to focus his studies on the Desert Iguana, Dipsosaurus dorsalis. He will begin by studying its sleep characteristics in the field, and then test specific hypotheses in the lab. He has come up with a set of very interesting experiments that will examine sleep as a mechanism for coping with ecological stressors, such as lack of food, presence of predators, injury, and social structure.

We will post some of Tim's findings here as they become available. We expect the summer of 2004 to be productive, as Tim will have a reprieve from his teaching load (he is a full-time faculty member at a community college). 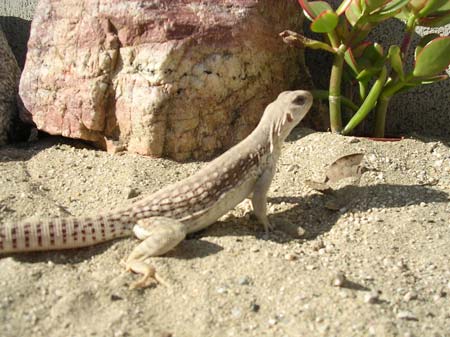 Desert Iguana, Dipsosaurus dorsalis. This lizard is often found in desert washes of southern California, particularly in the presence of Creosote Bush (Larrea tridentata). Largely a vegetarian, this lizard remains active for much of the day, even in intense heat, and sleeps at night. Photograph: Timothy Revell.