Research on Snakebite Severity and Treatment of Snakebite (with photographs)

To most humans, the prospects of snakebite evoke a strong emotional response. Indeed, snakes may kill up to a quarter-million people worldwide each year. Those who are bitten and survive must often contend with crippling disfigurement. Even though snakes do not seek us out as targets for envenomation, these reasons justify the fear and apprehension that many feel toward snakes.

Unfortunately, there are countless myths and misunderstandings that greatly exacerbate these fears. Regardless of where one lives, there will always be conflicting advice about the dangers of snakebite and how best to treat it. To obtain a clearer picture, we need solid research to tease apart the facts from fiction.

In collaboration with Sean Bush, MD (Loma Linda University Medical Center), Mike Cardwell (San Bernardino Sheriff's Department), and others, I have been studying the factors that influence snakebite severity and various options for treatment of snakebite. I will highlight a few of our findings here.

What makes a snakebite especially dangerous? Given the amount of data we now have on venom expenditure by snakes, we sought to find corroborative support for some of our findings by evaluating snakebite severity in clinical cases. By using the snakebite severity score (SSS) developed by other investigators, we were able to simultaneously evaluate five factors that might potentially influence envenomation severity in a sample of 100 snakebite cases presenting to LLUMC. We expected snake size to be a particularly important variable, but might other factors be equally or more important? Below, we provide a cursory summary of our results. 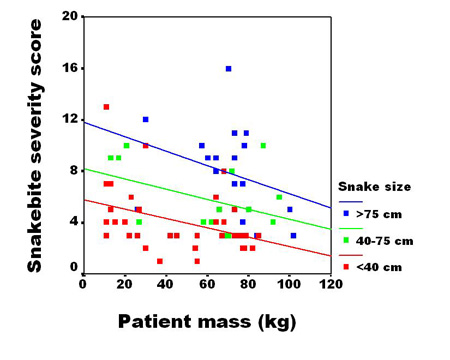 Snakebite Severity Score in relation to snake size and patient mass. Our data, based on simultaneous consideration (analysis of covariance) of five independent variables (snake size, patient mass, snake species, site of bite, number of fang marks), suggest that only two factors have a significant effect on snakebite severity: snake size and patient mass. Bites by larger snakes and to smaller humans result in more severe envenomation. Don't believe the myth that smaller snakes are more dangerous! Larger snakes have much more venom available to inject, and they really can unleash it... Source: Hayes et al., unpublished data. 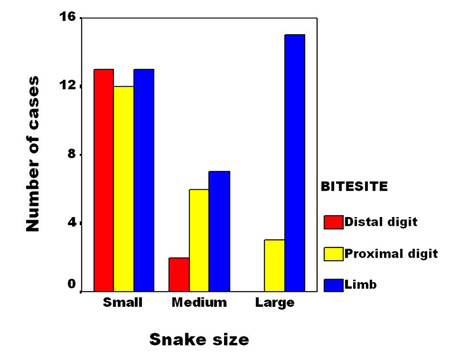 Number of snakebite cases in relation to snake size and bite site. Our data suggest that small snakes more often bite distal digits, whereas larger snakes seldom do and instead bite higher up the limb. Hence, because a previous study showing less severe bites to distal digits did not take into consideration snake size, their results may have showed nothing more than smaller snakes inflicting less severe bites. Source: Hayes et al., unpublished data.

As expected, snake size was indeed a very important factor, but so, too, was patient mass. Thus, investigators really should control for snake size and patient mass in any study of the factors influencing snakebite severity or of alternative treatment protocols. Failure to account for large, confounding effects such as these can lead to erroneous interpretation of experimental differences. We were also pleased to see that results (regarding snake size) were in general agreement with our findings from model human limbs (See Research on Venom Expenditure and Strike Behavior of Snakes).

Although the size of a patient can be readily assessed, how might a physician determine size of the offending snake? Certainly, the patient's description of snake size (small, medium, or large) can be helpful (if not exaggerated), but so, too, might be the distance between fang marks. Most of the time, two fang marks are present. To evaluate this possibility, we measured the distance between fangs of various-sized snakes using three different methods (see next two figures). We also made comparisons among five Southern California taxa. 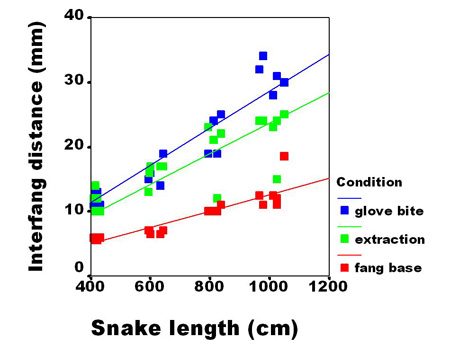 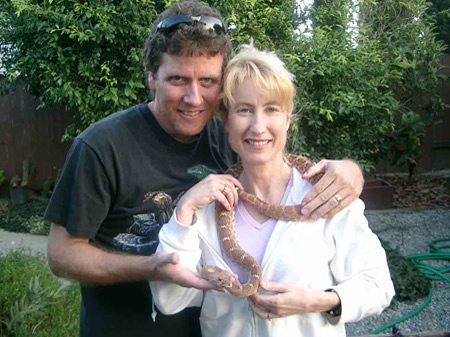 For goodness snake... This magnificent Red Diamond Rattlesnake (Crotalus ruber) is a very dangerous Southern California snake and should never be handled like this--unless, of course, it has been anesthetized first to measure the distance between its fangs (yeah...we look a bit anesthetized, too...). Photograph: Suzi Barry.

Our general conclusion? The results suggest that physicians can rely on a simple set of measures to estimate relative snake size (see table below). Clearly, a physician should be mindful of the greater risk of severe envenomation associated with bites by larger snakes.

The results described above were presented at an October 2003 meeting in Lethbridge, Alberta, Canada, and will be published shortly.

In other studies, we have considered several controversial methods of first-aid treatment.

In one published study (Bush et al., 2002, Ann. Emerg. Med. 40:619-624), we experimentally evaluated the effectiveness of a popular negative-pressure venom-extraction device (the ExtractorTM). To evaluate its effectiveness, we applied it in a controlled study of simulated envenomation using biologically relevant doses of rattlesnake venom injected into pigs (whose skin is histologically similar to humans). We found no statistical difference in measurements of limb swelling between suction application versus controls. In prior, unpublished measurements from human snakebite victims (other authors, not us), the amount of venom retrieved was negligible compared to the normal quantities that snakes inject. Curiously, we noticed local tissue necrosis in several pigs administered suction, suggesting a deleterious consequence (see next figure). Best advice? Just get to a hospital as soon as possible for antivenom administration. 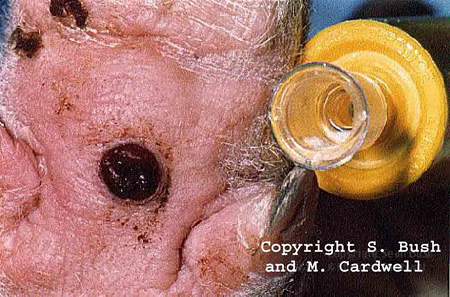 Does the ExtractorTM device remove venom? This device is widely sold to create suction that supposedly withdraws venom from the fang puncture wounds. Clinically, our results suggest no benefit to use of this device. In some cases, both for pigs (pictured here) and humans (published elsewhere), local necrosis can result from suction application. Prioritize getting to the hospital instead! Photograph: Michael Cardwell (Bush et al., 2002, Ann. Emerg. Med. 40:619-624).

In another, yet-to-be-published study, we experimentally evaluated the effectiveness of pressure-immobilization (use of a pressure bandage) on delaying mortality from snakebite. Pressure-immobilization (PI) is widely used for bites by elapid snakes (a large family of venomous snakes including cobras, mambas, kraits, taipans, tiger snakes, and sea snakes), whose venoms are largely neurotoxic with few, if any, proteolytic (digestive) enzymes. The use of PI restricts the venom to the bite site, thereby delaying life-threatening systemic effects until antivenom can be administered. Most viperid snakes (another large family of venomous snakes including true vipers as well as pitvipers such as rattlesnakes), in contrast, possess highly proteolytic venom (often less-appropriately called "hemolytic" venom). As such, the general consensus has been that use of PI for viperid bites would lead to unacceptable local tissue destruction. However, there may be circumstances in which the risk of death might outweigh the risk of tissue damage.

In the experiment, we injected Western Diamondback (Crotalus atrox) venom 10 mm deep into the tibialis anterior muscle of the hind leg of anesthetized pigs. The pigs were randomized to receive either PI (applied one minute following envenomation and left in place for the duration of the experiment) or no PI as the control. The PI treatment resulted in significantly longer survival than the control treatment (mean + SD: 189 + 33 min and 155 + 23 min, respectively). The PI treatment also resulted in significantly less swelling (mean + SD circumference: 14.3 + 0.8 cm with PI and 19.1 + 1.0 cm without) and significantly higher intracompartmental pressures (mean + SD: 67 + 13 mm Hg with PI and 24 + 5 mm Hg without). The longer survival suggests that PI might prolong life, a desirable goal if survival is in question because of (1) a serious bite and (2) a lengthy delay in gaining access to the most appropriate medical treatment--antivenom. However, PI treatment following bites by rattlesnakes may be accompanied by extensive and undesirable tissue destruction, as suggested by the higher intracompartmental pressures. Thus, any potential benefit of PI must be weighed against risks resulting from local tissue damage. Clearly, further study of the trade-offs between survival and tissue damage associated with PI treatment seems warranted.

For further discussion of snakebite treatment, see Sean Bush's eMedicine article. For interested audiences, Dr. Bush is willing to give an excellent presentation on snakebite facts and treatment (email me for contact information). Mike Cardwell and I also give talks on the biology of venomous animals.