To explore the private world of a rattlesnake has been an elusive goal until the development several decades ago of miniaturized radiotelemetry systems. Today, we have the remarkable capacity to implant tiny transmitters into highly secretive creatures, like snakes, and to relocate them almost at will. At present, we are conducting two large studies of free-ranging rattlesnakes in southern California. These studies are still in progress but they have already yielded interesting information.

With graduate student Eric Dugan, we are studying niche separation between Red Diamond (Crotalus ruber) and Southern Pacific Rattlesnakes (Crotalus helleri) at Chino Hills State Park. Southern California hosts six species of rattlesnakes, often with up to three species occupying what appears to be similar habitat. How do these snakes coexist with one another? Do they utilize resources differently?

The study site we have chosen to answer these questions is rather unusual in that there is virtually no rocky habitat available. Elsewhere, both species are frequently found in rocky areas. Because of limited funding and the effort required to track these snakes, we initially implanted radiotransmitters in adult males of each species (but have now begun to focus on females as well).

We have learned that C. ruber largely remains within or close to patches of prickly pear cactus (genus Opuntia). In contrast, the more numerous C. helleri prefers grassland and riparian habitat. Remarkably, four (44%) of nine radiotagged C. helleri were predated during the two-year study, probably by coyotes and/or bobcats, whereas none (0%) of the seven C. ruber were taken. We imagine that the cacti provide a better refuge. They sure make it difficult for us when we are tracking them!  Curiously, some of the C. helleri moved into the cactus patches during winter, suggesting that habitat differences are less apparent during the winter. Even so, there appears to be no aggregation of individuals of either species during winter.

As a part of the project, we will seek to identify other differences in resource utilization. For example, we will compare diet based on scat analysis and direct observations. We will also consider the phenology of reproduction. Fortunately, we can draw additional comparisons between C. ruber at our study site and those at another site in Escondido, California, where Dr. Tracy Brown has been studying them for a number of years. This latter population lives in a rocky habitat, where individuals often aggregate during hibernation.

More recently, graduate student Alex Figueroa has sought to learn more about the secretive lives of neonate Southern Pacific Rattlesnakes. He has used tiny, externally-glued transmitters to follow their activities. The neonates frequently utilize arboreal microhabitats in small shrubs up to 90 cm above the ground. Lizards of all age classes also abound in this microhabitat. Adult C. helleri at our study site, in contrast, rarely climb into shrubs. More results will be forthcoming as Alex continues his study. 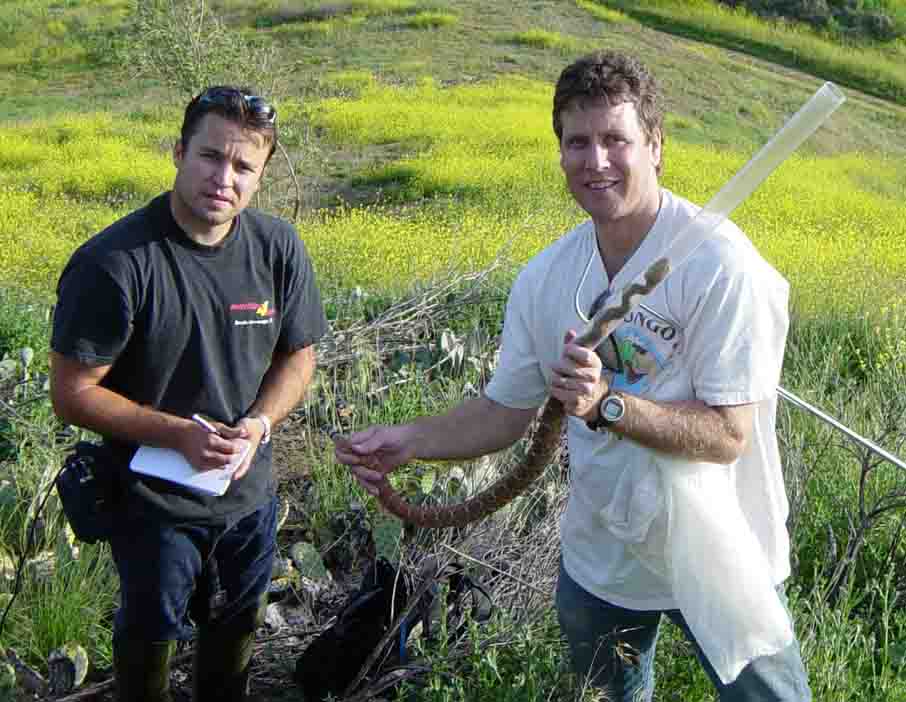 In the tube! Eric Dugan (left) and I just captured this Red Diamond Rattlesnake (Crotalus ruber), one of the first at our Chino Hills State Park study site that would receive a surgically-implanted radiotransmitter. Photograph: Pat Barry. 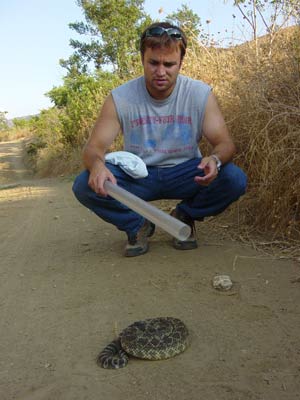 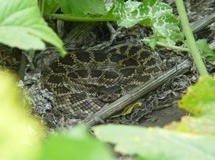 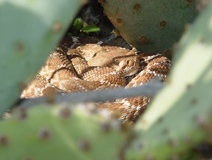 Some like it leafy, others like it thorny. Note the difference in habitats preferentially used by these two species. The Southern Pacific Rattlesnake (left) generally seeks out grassland and riparian habitats at our study site, whereas the Red Diamond Rattlesnake (right) prefers to hang out in Opuntia cacti. Photographs: Eric A. Dugan. 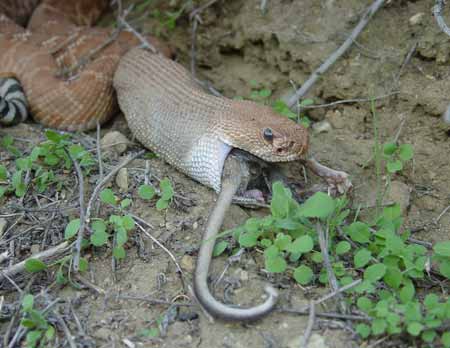 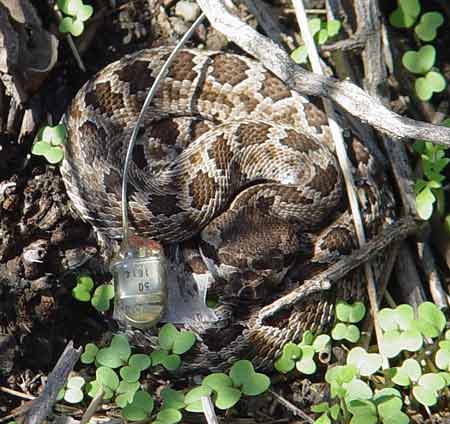 You can crawl but you can't hide... This neonate Southern Pacific Rattlesnake has a tiny radiotransmitter super-glued to its body. The snake seems oblivious to the unit and we can only hope that its behavior remains unaffected. Photograph: Alex Figueroa.

Mike Cardwell initiated a field study of C. scutulatus in 2001. Although a full-time Deputy Sheriff with the San Bernardino County Sheriff's office (until retirement in spring 2004), his commitment to the project was  amazing. I wish that I had more opportunity to help out, as he conducted all of the field work himself and deserves all the kudos for collecting a massive amount of data. Mike is also a professional photographer; you might want to check out his very impressive web site.

The study site is east of Victorville, California, at an elevation of ca. 900 m in the Mojave Desert. Creosote Bush (Larrea tridentata) dominates the landscape. Between August 2001 and December 2003, we have radiotracked 17 adults (8 males, 9 females). Three of these have been killed by unknown predators, one died of an apparent natural death, and another disappeared with no hint of its fate, but was probably taken by a predator.

During the active season (March-October), the snakes frequently adopt ambush postures near rodent burrows or trails, frequently at the base of a Creosote Bush or in the open. We have observed the snakes preying on three rodent species (Dipodomys merriami, Perognathus sp., Ammospermophilus leucurus), and on one lizard (Cnemidophorus tigris). Sexual activity occurs during both spring (April-May; 6 observations in 2003) and fall (August-September; 5 observations in 2001, 1 in 2002, 5 in 2003). However, sexual activities were virtually absent during the drought year in 2002. Male movements increase dramatically during the mating season (mean = 90 m/day in April 2003) compared to other months. The mean home range size (March-October) is also greater for males (16.3 ha; n = 4) than females (2.2 ha; n = 5).

Year-round, the rattlesnakes prefer to utilize rodent burrows as refugia, mainly those of kangaroo rats (Dipodomys species). These are usually at the base of a Creosote Bush. The snakes do not aggregate during winter, neither with conspecifics nor other species. Surprisingly, the snakes have ignored rock outcroppings and packrat (Neotoma) middens. Of three snakes (2.1 male:female) monitored for three consecutive winters (2001-2004) and eight snakes (3.5) monitored for two consecutive winters (2002-2004), only one has returned to a previously used winter site. This individual (female #40) occupied a Dipodomys complex beneath a Creosote Bush the last two winters, and was only 5 m from this complex the previous winter. All other consecutive winter sites have been at much greater distances.

With Joe and Joey Banishek, Zia Nisani and I are also exploring the factors associated with nocturnal activity in the western Mojave Desert. Why do we have more success on some nights and less success on others encountering snakes while road-hunting at night? Certainly, time of year (March-October) and adequate warmth (>12 C) are important, but what about moonlight, barometric pressure, humidity, wind speed, wind direction, and other potential factors?

Using a general linear model for analyzing 249 nights of sampling during the period 2002-2004, we detected several subtle differences in encounter rates (snakes/hour) between rattlesnakes (n = 339 Mojave Rattlesnakes and 17 Sidewinders, C. cerastes) and non-venomous snakes (n = 109 encounters of six species). For rattlesnakes, only year (2002 poorest, 2003 best) and moonlight (more snakes with more moonlight available) explained significant variance in encounter rates, whereas for non-venomous snakes, only year (similar pattern), month (far fewer snakes late in season), and barometric pressure (more snakes with lower pressure) proved to be significant. Popular opinion holds that snake activity declines with more moonlight available due to predatory vulnerability, but our data do not support this view. Of course, activity patterns could differ substantially at other locations. 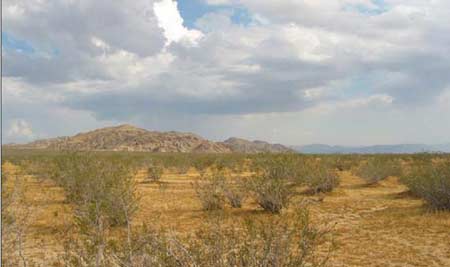 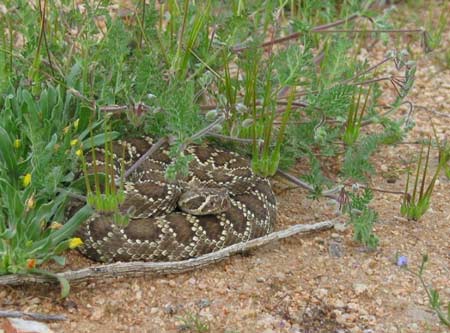 A snake in the grass. An adult male Mojave Rattlesnake (Crotalus scutulatus) pauses to warm up in the sun before looking for a mate on a chilly spring morning. The wildflowers are evidence of a wet spring in the desert. Photograph: Michael D. Cardwell. 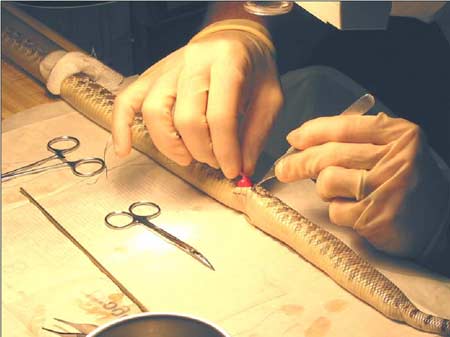 The surgeon and his subject. Mike inserts a small (9 g), temperature-sensitive radiotransmitter into the peritoneal cavity of a Mojave Rattlesnake. The beep rate of the signal will vary with the snake's internal temperature. Photograph: Denise Garland. 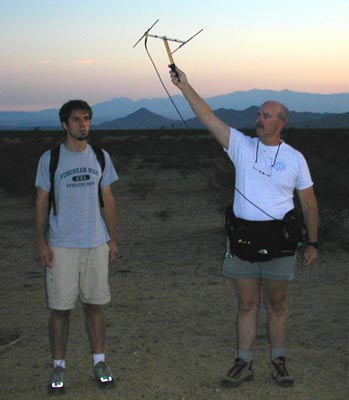 Romeo, Romeo, where art thou? Mike (holding the antennae) and Aleix Ferrer (a visiting student from Spain) home in on the signal of a radiotransmitter inside Romeo, one of the adult male rattlesnakes. We often locate the snakes during the evening hours, when the desert is cooler and the snakes are more active. Photograph: Shelton S. Herbert. 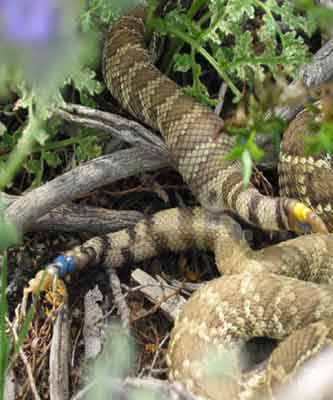 Snake sex... In case you've ever wondered how snakes do it. Using his remarkably sensitive tongue-vomeronasal organ system, Romeo tracked down a receptive female and wooed her with repeated forward-jerking, tongue-flicking, and tail-stroking while on top of her body. Overwhelmed by his charm, the female eventually permitted him to insert one of his two hemipenes into her cloaca. Copulation may last up to several hours. Note the paint markings on the tails of these two snakes, which allows us to recognize individuals without the need for recapture (one of these snakes does not have a radiotransmitter). Photograph: Michael D. Cardwell. 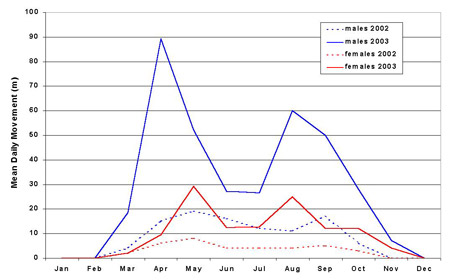 Movements by Mojave Rattlesnakes. Note that mean daily movements (in meters, averaged for an entire month) were greater for males than females, maximal in spring (April-May) and fall (August-September), and more substantial during the wet year of 2003 compared to the drought year of 2002. Source: M. Cardwell, unpublished data.

We also love going out after snakes for the simple joy of it! Regardless of whether we search an area by day (usually lifting objects) or by night (usually road-hunting), we briefly admire most snakes encountered and then let them continue on their way. Even without collecting any data, we are getting a better idea as to what species can be expected when and where. With regard to our many projects, we believe that our research is valuable and makes an important contribution to society, but we always seek to minimize the number of animals used. And for those snakes we do use, we pay close attention to meet their needs.

Sadly, there are quite a number of people who seek financial gain by collecting and selling illegal numbers of the more prized species. Some illicit collecting techniques (e.g., applying a crowbar to rocks) will irreparably damage the environment. Given the intense pressure these unique species already experience from rapidly expanding development, drought, and wildfire, why would anyone wish to exploit such beautiful creatures for this purpose?

Our hope is that the more we learn about snakes and communicate our findings to the public, the more people will appreciate them and seek to preserve them and the fragile environments they live in. 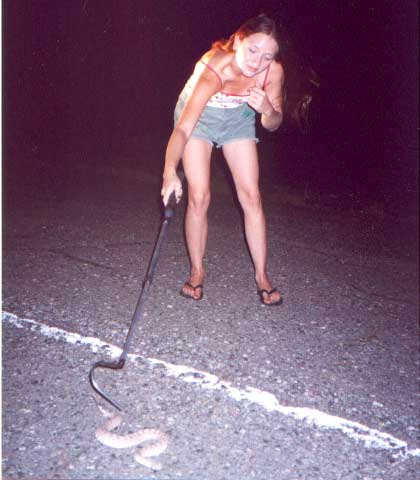 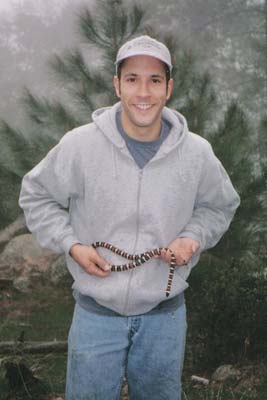