Research on Venom Expenditure and Strike Behavior of Snakes (with photographs)

How much venom do snakes inject when they strike? This topic has been the primary focus of my research since 1988. Below, you will find a brief overview of some of our findings. To learn more about how snakes use their venom, you can read a thorough review article (Hayes et al., 2002) in the peer-reviewed volume, Biology of the Vipers (G. W. Schuett et al., Editors, 2002, Eagle Mountain Publ., Eagle Mountain, Utah; please e-mail me to request a reprint). I am also willing to give my favorite presentation, The Fatal Bite: How Snakes Use Their Venom, to interested audiences.

Using a state-of-the-art immunological technique, Enzyme-Linked ImmunoSorbent Assay (ELISA), my studies were the first to provide a number of fascinating insights on venom use related to the predatory behavior of venomous snakes. Here are some examples:

Rattlesnakes are only about 90 percent effective in delivering their venom when biting a mouse, while the remaining 10 percent is spilled harmlessly on the skin (Hayes et al., 1992, pp. 383-388 in Biology of the Pitvipers). Surprisingly, rattlesnakes were no more "efficient" at delivering venom into tissues than elapid snakes with comparatively short, rigid fangs.

Whereas large snakes inject more venom than smaller snakes as might be expected, hungry snakes inexplicably release less venom than well-fed snakes (Herpetologica 49:305-310). Perhaps the hungry snakes are trying to conserve their venom.

Rattlesnakes clearly handle birds differently than mice, and probably inject more venom into birds Hayes, 1992, J. Herpetol. 26:496-499). When they strike large rodents, they typically release them to avoid injury and then follow the rodent's chemical trail to relocate its carcass. When they strike birds, they typically hold on; if the bird was released and flew any distance, there would be no trail to relocate it!

One species of rattlesnake (Crotalus concolor) handles mice and lizards similarly, releasing both after envenomation; however, the snakes inject similar amounts of venom into both even though the lizards are relatively small (Hayes et al., 2002, pp. 207-233 in Biology of the Vipers). The ectothermic lizards survive a lengthy time after envenomation, and the additional venom can bring about death more rapidly.

We have even studied a "nonvenomous" snake that produces a secretion (from the Duvernoy's gland) toxic enough to put children into hospitals. With Dr. Ken Kardong (Washington State University), we showed that the Brown Tree Snake (Boiga irregularis) releases a substantial portion of its Duvernoy's secretion when feeding on mice, though much of it remains on the surface or lodged within the skin of the mouse, presumably to serve a digestive function (Hayes et al., 1993, Toxicon 31:881-887).

The conclusion that snakes can control how much venom they inject, the venom-metering hypothesis, has recently become a controversial topic. I have prepared a lengthy manuscript that addresses both objections to and evidence for this hypothesis. Watch for it to appear in press soon! 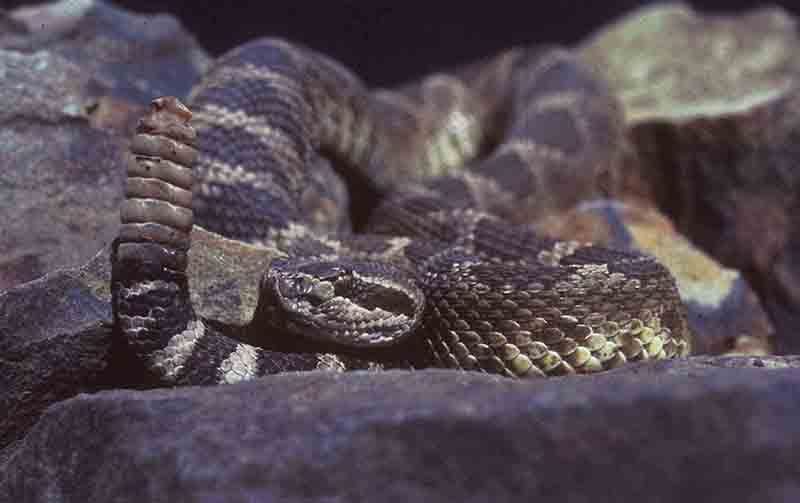 Northern Pacific Rattlesnake (Crotalus oreganus). This dangerous snake is one of several taxa studied in the lab to learn how snakes use their venom. Photograph: William K. Hayes. 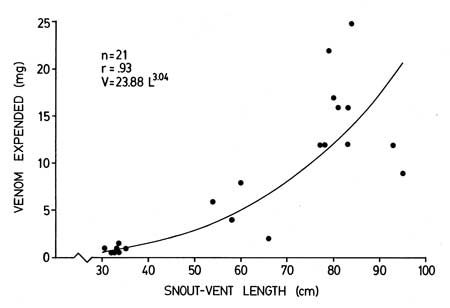 Snake size influences venom delivery. Contrary to popular opinion, big rattlesnakes really do inject more venom! These data were obtained from the predatory strikes of various-sized Prairie Rattlesnakes (Crotalus viridis). Even though baby and juvenile rattlesnakes have more toxic venom, larger snakes have substantially more venom in the glands and they use it! Source: Hayes, 1991, Toxicon 29:867-875. 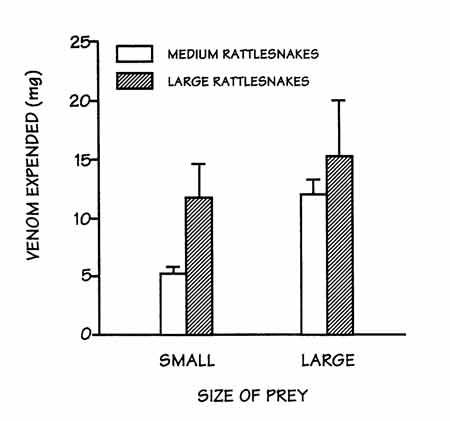 More recently, we have begun to examine defensive strikes, which are particularly important to the problem of human snakebite (Hayes et al., 2002, pp. 207-233 in Biology of the Vipers). To our surprise, we learned that rattlesnakes appear to inject more venom into models of human limbs (warm, human-scented, saline-filled gloves) than into mice. However, roughly 10 percent of the bites are dry, which is much more frequent than that observed for predatory bites. We also found that, contrary to popular belief, large rattlesnakes inject far more venom than small rattlesnakes when biting defensively. The larger rattlesnakes have much more venom available and experimental evidence (from predatory strikes) suggests that even smaller snakes can control, or meter, their venom.

We have discovered some interesting differences between species. When delivering three defensive bites at model human limbs within a relatively brief time, southern Pacific rattlesnakes (Crotalus helleri) inject slightly declining amounts with each successive bite, whereas cottonmouths (Agkistrodon piscivorus) inject less in the first bite and more in subsequent bites. Also, rattlesnakes inject similar amounts when striking at gloves and when grasped and forced to bite a membrane-covered beaker (i.e. venom extraction), whereas cottonmouths inject much more during venom extraction. With Jim Harrison at the Kentucky Reptile Zoo (in Slade, Kentucky), Scott Herbert and I have also shown that Monacled Cobras (Naja kaouthia) similarly inject far more venom when grasped (during a venom extraction) than when biting a glove.

More exciting, we have found that articles of clothing such as blue jeans may interfere with venom delivery. A yet-to-be-published experiment revealed that small and large southern Pacific rattlesnakes inject approximately two-thirds less venom into model human limbs when they are covered by denim! Obviously, millions of Americans should be interested to learn that jeans can provide significant protection when in rattlesnake habitat! (By the way, Levi, Inc., declined support of this research.)

Our research on defensive bites continues at a steady pace, and we look forward to more interesting discoveries. However, you may wish to check out our research on Severity and Treatment of Snakebite (with photographs). Some of our conclusions find support in our analyses of factors associated with snakebite severity. 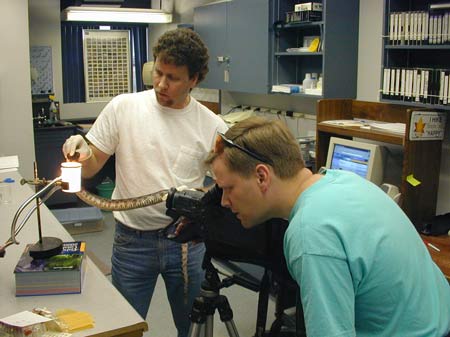 Venom extraction. Scott Herbert videotapes a venom extraction. His research on Southern Pacific Rattlesnakes (Crotalus helleri; shown here) and Cottonmouths (Agkistrodon piscivorus) shows a strong correlation between duration of bite and quantity of venom injected for defensive bites. The quantity of venom expended and rate of venom expulsion are also positively correlated with snake size. Moreover, during a single extraction, there is considerable variation in venom flow between right and left fangs and between successive pulses delivered by the same fang, suggesting that the snake can control venom expulsion independent of target properties (i.e. it's not a constant amount, or "bullet," each time). Photograph: Michael D. Cardwell. 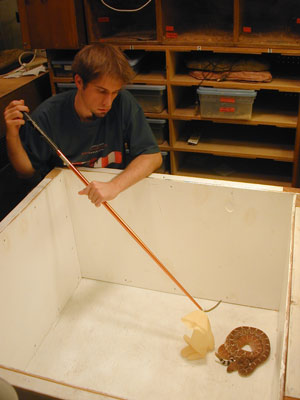 Because we can't use graduate student hands... As much as we'd like to use human volunteers ("dispotechs," as I would call them), we obviously must rely on an alternative to learn how much venom snakes inject during defensive bites. Here, Aleix Ferrer, a visiting student from Spain, harasses a Red Diamond Rattlesnake (Crotalus ruber) with a model human limb--a warm, human-scented, saline-filled glove. We can readily measure the venom injected into the glove. And...we also avoid an enormous medical (or funeral) bill. Photograph: Shelton S. Herbert. 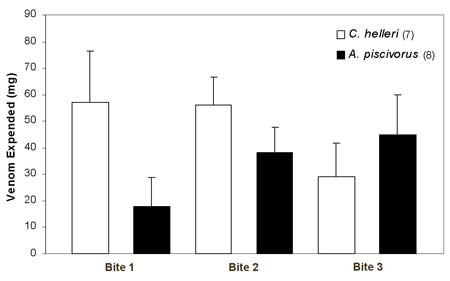 If you've never had the chance to see what the mouth and fangs look like when a snake puts them into action, you can view the videos below to see footage of venom extractions. You will be impressed to see the venom ejected from the fangs, sometimes in multiple pulses (most commonly observed when a snake is physically restrained) and sometimes even from a third (reserve) fang. Bear in mind that venom extraction, commonly called "venom milking," is a very dangerous practice and should be conducted only by experienced professionals and only for legitimate reasons, such as the research done in our lab. Most professionals who extract venom eventually suffer a serious (or even fatal) snakebite, so don't take this advice lightly. We don't do this stuff just for fun. We perform the extractions only when we need the venom or when we are studying the mechanics of venom expulsion.

Click the play arrow (above, left) to start the movie.

Click the play arrow (above, left) to start the movie.