Research on Venom Expenditure by Scorpions (with photographs)

With graduate student Zia Nisani, I am interested in the predatory and defensive behavior of two scorpions from the family Buthidae (Koch): Parabuthus transvaalicus (Purcell) and Androctonus australis (Linnaeus).

Parabuthus transvaalicus is the largest member of the buthid family and can grow up to 15 cm. The venom of this species is of medical importance and has an LD50 of 4.25 mg/kg. This scorpion inhabits hot and dry deserts and semi-arid regions of Africa.

Androctonus australis is a medium-sized scorpion and is considered one of the world's most dangerous scorpions, with an LD50 of 0.32 mg/kg. This species can be found in dry habitats of Africa.

Part of Zia's research has to do with venom use by these scorpions under predatory and defensive conditions. Specifically, he wants to see if these scorpions can control the amount of venom they inject into prey items. Do they inject greater quantities of venom into larger prey items than smaller ones? Does the amount of venom injected correspond to struggle intensity of the prey, or can a decision on how much venom to use be made prior to attack, much as snakes seem capable of? As for defensive stings, do scorpions inject less venom in the initial sting and increase the dose as the threat continues? We will be seeking answers to these questions through a series of carefully controlled experiments.

We are also interested in the venom-spraying behavior of P. transvaalicus. Very few species of scorpions have the ability to squirt their venom. Currently, most people believe that this is a reflex reaction that has a defensive value. However, we suspect that this behavior may be more than a reflex reaction, perhaps involving threat assessment and a decision as to how much venom to squirt. As part of this project, Zia will also conduct ultrastructural and histological studies of the venom apparatus of P. transvaalicus.

We have just begun our work on these scorpions and look forward to the studies ahead. As results become available, we will post some of the highlights here. 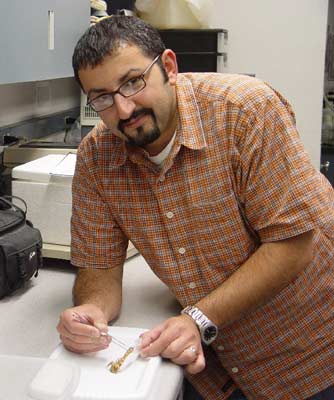 The Scorpion Master. Zia Nisani carefully displays one of the world's most dangerous scorpions. Note his expert use of tweezers applied to the scorpion's tail. Good idea, huh? Photograph: Eric A. Dugan. 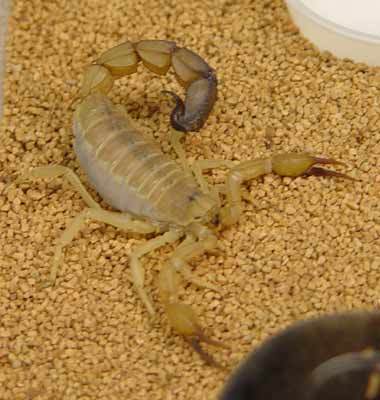 Androctonus australis. The typical defensive posture exhibited by this species. Note the tail elevated above the mid-body, ready to strike if necessary. No scorpion that I've ever met likes to have its tail grabbed by cold tweezers. Photograph: Eric A. Dugan. 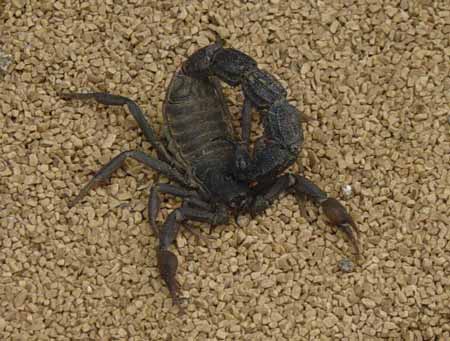 Parabuthus transvaalicus. The typical defensive posture exhibited by this species. Note the tail elevated just above the head rather than at mid-body, ready to strike if necessary. Naturally, this scorpion detests the cold tweezers, too. I can't blame it. Photograph: William K. Hayes. 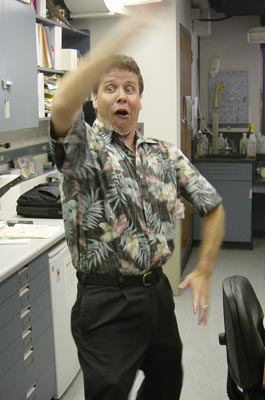 Major professorus. The typical defensive response exhibited by any major professor when threatened by a student. Heed this advice: when your professor enters the lab, it's always a good idea to put down the tweezers... Photograph: Lab Security Cam. 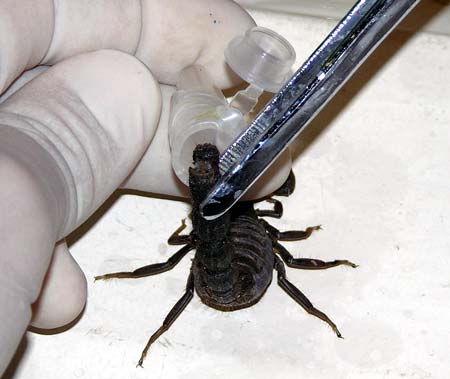 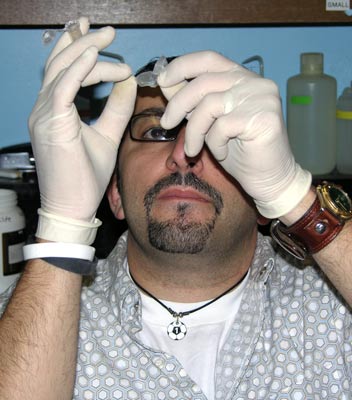 Visual examination of the venom. Zia checks on the venom color to determine whether it is clear or milky white. The clear fluid is "prevenom," consisting primarily of potassium ions that induce pain and kill insects. The milky fluid is considered "venom," comprised mainly of peptide and protein toxins that are more lethal than prevenom. The former may be used in an initial sting, with the latter withheld until later stings if needed. Photograph: William K. Hayes. 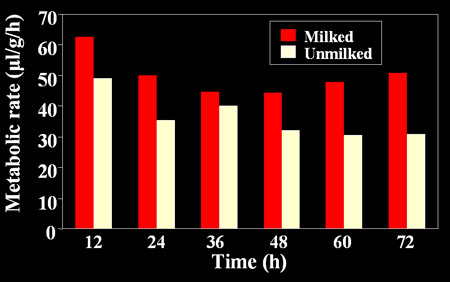