Hope for the Hawksbill 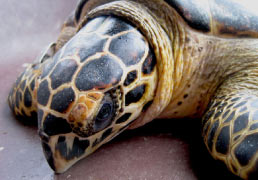 Things may not be as bleak as they once seemed for one endangered sea turtle. A new survey finds that hawksbill turtles are more widespread in the eastern Pacific than earlier studies had suggested. Still, the "comparatively optimistic" findings still show that the turtle continues to be highly endangered and will need help to survive.

The hawksbill (Eretmochelys imbricate) is found around the world in tropical seas, but is deemed "critically endangered" by the International Union for the Conservation of Nature. In part, that's because the turtle has been heavily hunted for its elaborately colored shell, which is prized by jewelry and crafts makers. Whole turtles are also killed, stuffed, and sold as curios. By the 1980s, biologists feared the species was essentially extinct in the eastern Pacific, where it was once common from Mexico to Ecuador. It is now considered the rarest marine turtle in the region.

To get a better picture of how the hawksbill was faring, in June 2008 sea turtle experts gathered in El Salvador to share data and identify possible conservation strategies. Now, in the journal Oryx, the multinational team presents some encouraging news: Surveys conducted between January 2007 and May 2009 found hawksbills nesting on beaches in 6 nations in the eastern Pacific, and swimming in coastal waters off 7 nations. Overall, researchers spotted 540 nests, with nearly 80% in El Salvador. Mexico ranked first in swimming turtles, with about 60% of the 73 animals recorded, according to the study, which was published online on August 27.

The numbers are preliminary, in part because the surveys were limited and the animals tend to use remote beaches for nesting. Still, they suggest that El Salvador "hosts the largest known remaining hawksbill turtle rookeries in the eastern Pacific, highlighting the urgent need to consolidate protection, conservation and research for the species there." One continuing threat is "bomb fishing," or the use of explosives to kill or stun fish and force them to the surface. The number of turtles found off Mexico, meanwhile, underscores "the importance of the country's waters as a foraging and nursery area." But it also poses a puzzle, since the turtles don't seem to be nesting in Mexico. One possibility is that Mexican waters serve as "an important migratory pathway or developmental area."

Overall, the findings suggest just a few hundred turtles reproduce annually along more than 15,000 kilometers of coastline. Still, "the pervasiveness of the species in the region suggests potential for conservation and recovery," the authors conclude. So far, they add, the hawksbill has gotten relatively little attention from conservationists in the region, so even a modest increase in effort might bring significant gains. - David Malakoff

The rock formations of the Columbia Basin were formed by some of the most unusual and catastrophic processes in geologic history.

Like pages in a book, the rock layers of Black Canyon and Curecanti tell a story of past environments, ancient animals and dynamic processes of...