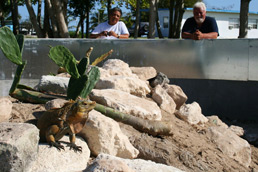 On a barren, sparsely vegetated cay in the Bahamas, a handful of curious iguanas cautiously approached a small group of people, lured by the prospect of feeding on small bits of orange peel and bread. These iguanas had no idea they would become ambassadors for their kind—a critically endangered lizard with as few as 500 individuals remaining globally. Within the hour, they found themselves in a comfortable new home at the San Salvador Iguana Conservation Centre.

The morning of May 9, 2012, marked the opening ceremony of the new facility, situated at the Gerace Research Centre on San Salvador Island, in the southern Bahamas. The Iguana Conservation Centre is designed to breed and raise the iguanas to a large enough size where they can be safely released to selected areas around the island.

Attendees at the ceremony included representatives from the island's administrative office, the San Salvador Living Jewels organization, the Gerace Research Centre, and the Bahamas National Trust. Two biologists who conceived and guided the development of the facility were also present: William Hayes of Loma Linda University, California, and Tom Crutchfield of Homestead, Florida. Representatives from the two funding organizations also attended the ceremony.

Seacology, a nonprofit organization based in California, funded the project because it furthered their mission of saving endangered species, habitats, and cultures of islands throughout the world. As Duane Silverstein, their Executive Director, put it, "Although islands conjure up images of pristine tropical paradises, they are actually among the world's most threatened ecosystems. In the last 400 years, 50 per cent of all animal species extinctions and 90 per cent of all bird species extinctions have occurred on islands." To date, Seacology's efforts have led to more than 1.6 million acres of critical habitat being preserved around the world. This is their first project in The Bahamas, but a second in Abaco is also underway.

Seacology's partner in the funding, FIBC First Caribbean, saw their support of this project as "further tangible evidence of its commitment to its communities, a promise made back in 2002 when the Bank was formed," says Marketing Manager Andrea Myers-Tanguay.

As a renowned educational institution operated by the College of the Bahamas, the Gerace Research Centre is ideally situated to house the iguana program. For more than 30 years, this facility has hosted visiting scientists, teachers, and students interested in the diverse and unique tropical environments available on San Salvador. Guests of the Centre, visitors to other resorts on San Salvador, and residents of the island can now visit the new iguana facility to learn more about one of the most charming denizens of the Caribbean.

"We are really excited to have this facility," says Tom Rothfus, Director of the Gerace Research Centre. "Now we have something people can get behind, and see that there is an endangered animal we're protecting right here—and the greater significance of protecting their communities and environments."

Public education comprises a major goal of the Iguana Conservation Centre. Guests at the Centre will be able to see the highly photogenic iguanas in the beautiful open air pen. Attractive signage describes the plight of these iguanas and some of their more fascinating habits. Prior to the creation of this facility, few visitors to San Salvador even knew the iguanas existed. Presently, the lizards are largely confined to a few offshore cays and to small islets in the inland lake that are difficult to access. Although a few iguanas persist on the main island, they are very rarely encountered.

Tom Crutchfield, a leading herpetoculturist and iguana breeder from Homestead, Florida, designed the structures to be used for breeding and headstarting the iguanas. He also carefully selected the iguanas that were placed in the new facility to ensure their compatibility.

"I can't think of anything more rewarding and satisfying than to see these endangered lizards benefit from a program designed to increase their numbers in the wild," said Crutchfield. "I have traveled to the Bahamas for many years, and have dreamed many times about programs like this being created for this island nation's threatened reptiles. This is a dream come true."

Joe Wasilewski, another Homestead, Florida, biologist who helped to plan the facilities, agreed. "There has been no prior project like this for endangered Bahama species. The iguanas will have all the help they need now. This is what conservation is all about."

Another goal of the new iguana facility—perhaps the most important—is to bring formal protection to San Salvador Island's unique but highly threatened habitats. In addition to the iguanas, the island hosts some of the largest and most diverse seabird colonies in the archipelago. Other endemic animals found nowhere else cling to a tenacious existence on what many believe was the first land in the New World that Columbus set foot on. Beautiful reefs surround the island, which comprise a major tourist attraction but are susceptible to overuse.

According to Michael Goffe, President of San Salvador's Living Jewels, "we hope to work closely with the Bahamas National Trust to reinvigorate our efforts to establish a new national park on this island. Many of the island's residents want the benefits that come from habitat protection."

If expectations for the new iguana ambassadors seem daunting, the lizards appear to be nonchalant about all the hype. After a few hours of tongue-flicking while exploring their new digs, they quickly settled in. They appear to be enjoying the new varieties of food delivered to them on a daily basis, and seem fascinated by the stream of guests that peer over the wall at them. Tom Rothfus reports that he has observed mating activities, suggesting the lizards are, indeed, up to the task of meeting expectations.

If all goes well, the iguanas will persist for future generations of humans to enjoy them.

Note: A brief but fabulous video covering this story can be viewed at http://tinyurl.com/7eks39t. Those wishing to support the iguana conservation program can send a check to the Gerace Research Centre, San Salvador Island, The Bahamas.

Animal venoms contain many different proteins that each perform a specific role in contributing to the various physiological effects...

Geology from the Air

In July, 2012, I had the grant funds for an adventure with practical purposes. It was an aerial photography trip in southern Utah.