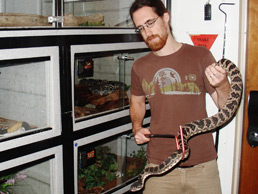 Animal venoms contain many different proteins that each perform a specific role in contributing to the various physiological effects caused by envenomation. Research into the specific mechanisms through which these proteins work is incredibly valuable because it facilitates important advances in treatment of envenomated patients. In addition to limiting their harmful effects, researching venoms allows researchers to discover new ways to put venom proteins to use for good, such as in pharmaceutical drugs for the treatment of various diseases.

Eric Gren, a Ph.D. student in Dr. Hayes' lab, is studying venom collected from various populations of Pacific rattlesnakes (Crotalus oreganus) spread across California, Oregon and Washington. Venom protein profiles (and therefore, venom toxicities) vary dramatically among these populations. Patients envenomated in many areas of the snake’s range present relatively minor symptoms such as localized tissue damage while the venom of snakes in other areas induces life-threatening muscle paralysis or cardiotoxicity. As suggested by the geographic variation in venom activity, Eric's research has shown that snakes in the same area exhibit venom protein profiles very similar to each other but significantly different from other populations. Eric has been working to identify which specific proteins are present in various venom profiles. He then compares venom protein profiles to toxicity assays using animal models (chicks, mice and lizards) to identify which proteins are contributing to the observed increases in toxicity and whether proteins vary in their effects among prey taxa. The next phase of his project will be to investigate how these proteins work by analyzing their molecular effects on ion channels in tissue samples.

Eric also enjoys conservation and ecology research and has assisted fellow students in the field with behavioral, genetic and population status studies of the Greater Antillean oriole, chuck-will’s-widow, and rock iguanas in the Bahamas.