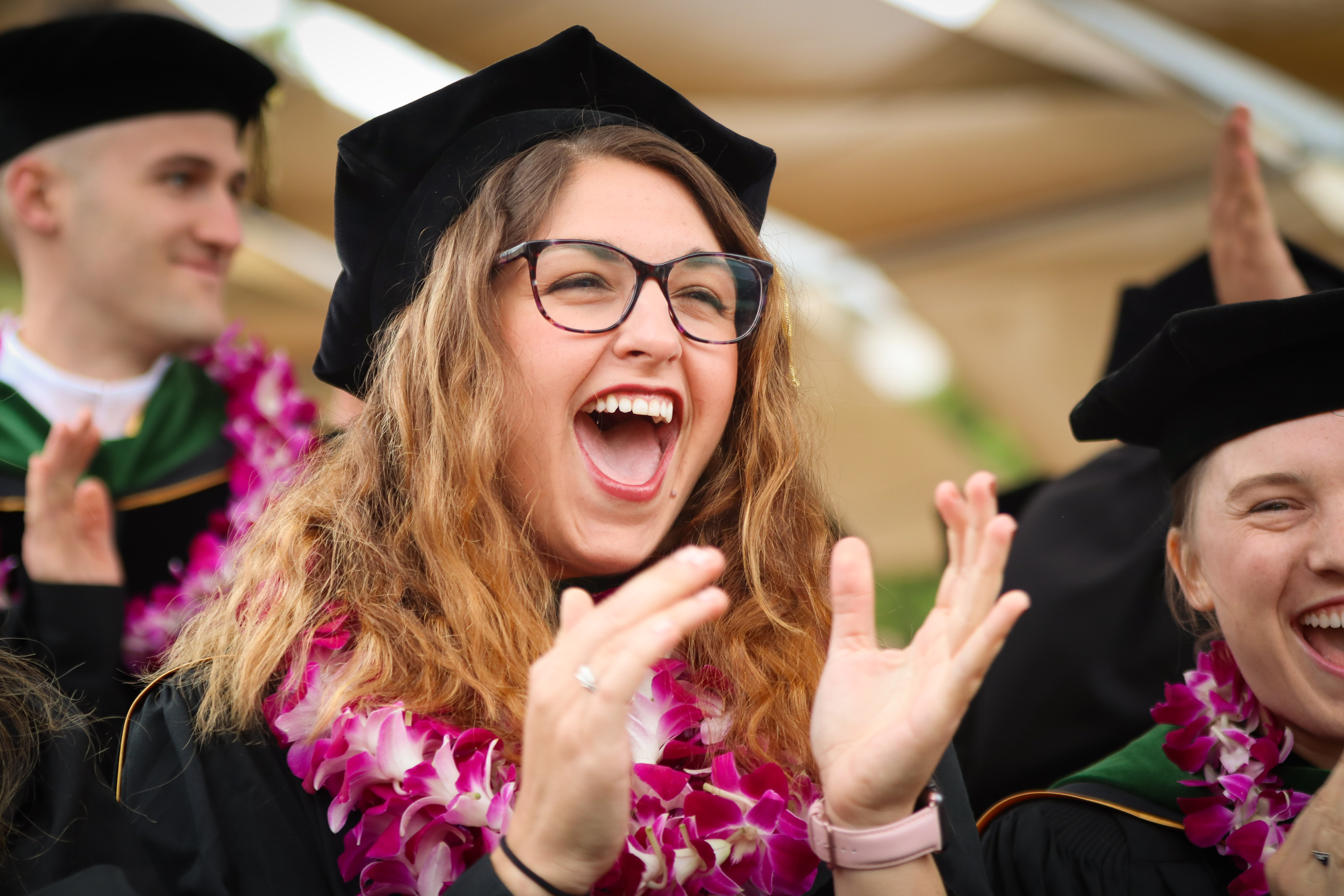 Loma Linda University’s School of Medicine’s commencement service, held May 27 on the campus mall, honored the academic excellence of a new generation of 185 physicians and medical researchers who have completed this phase of their academic journey. The University also presented a Lifetime Service Award to alumnus Leonard Bailey, MD, an iconic surgeon, for his four decades of leadership and research in infant heart transplantation.

Bailey’s groundbreaking work began early in his career when he confronted the disturbing reality that existing reconstructive surgical procedures were inadequate for babies born with certain complex congenital heart diseases.

In 1984, Bailey made medical history when he transplanted a baboon heart into the infant known as “Baby Fae.” Although she died twenty-one days later, this pioneering endeavor paved the way by November 1985 for the first successful human-to-human heart transplantation in 4-day-old “Baby Moses” (real name Eddie). Bailey has actively participated in the evolution of the field of heart transplantation — making possible long-term survival for infants and children with heart problems.

“Since Leonard Bailey’s breakthrough procedure, thousands of children’s lives worldwide have been saved because of infant heart transplantation,” said Ronald Carter, University provost, during the award presentation. “Central to the extraordinary events that captured the attention of the world and made medical history was Leonard Bailey.” 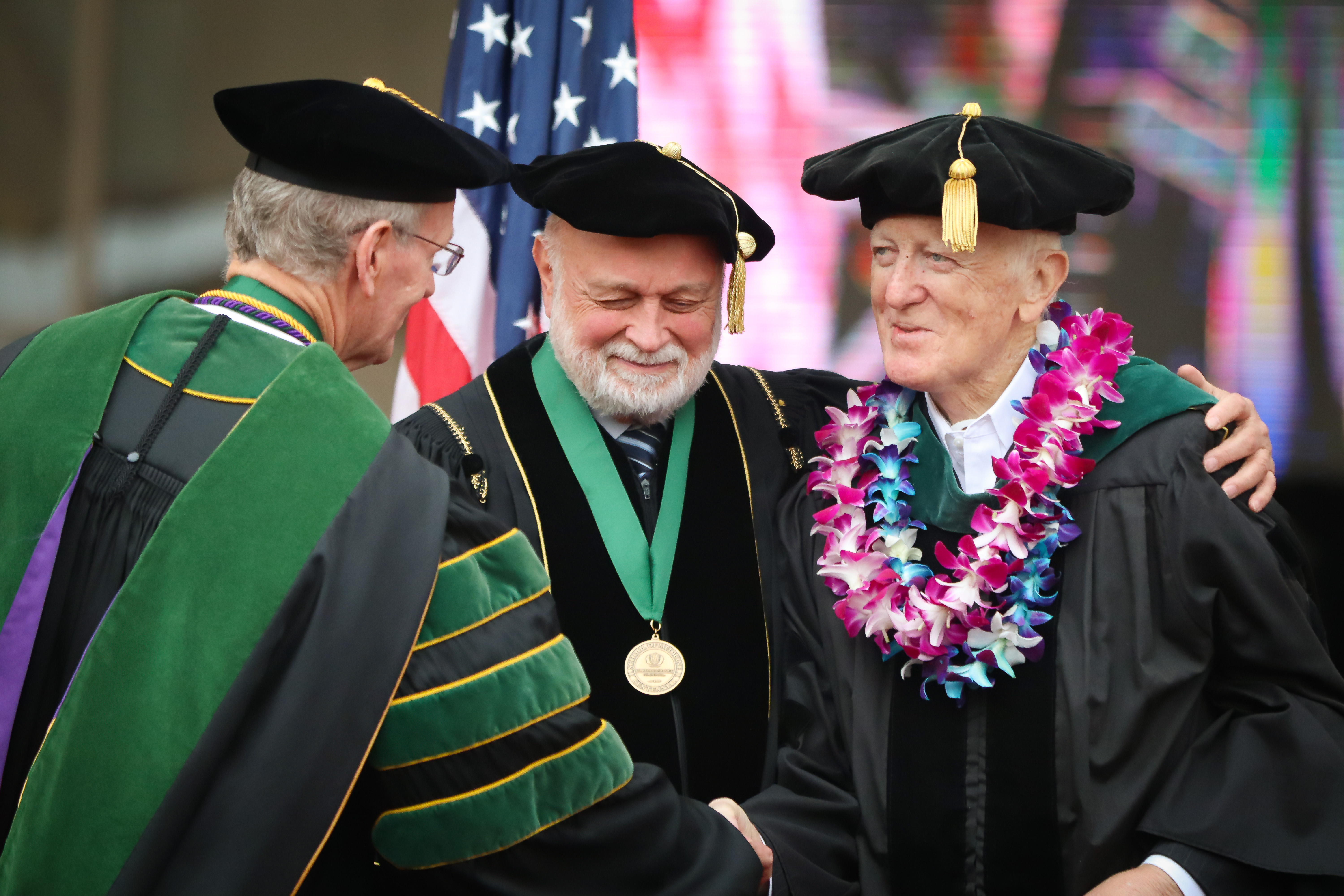 “Dr. Bailey, you have inspired the careers of many surgeons among this class,” Udrea said. “And even among those who did not choose surgery, your mentorship and compassionate whole person care have impressed the lives of countless physicians and thousands of patients.

Udrea also shared with his classmates some advice he received during his time as a School of Medicine student.

“Never forget what it was like to be a medical student,” Udrea said. “We will all have medical students working under us in the future. Our mentorship will make or break a future’s students interest in that specialty.”

Nephtali Gomez, MD, clerkship director for surgery at the School of Medicine, addressed the graduates on the theme “Doctors, Superheroes, and the World of Tomorrow.”

“Today you receive the title of doctor. But I propose that becoming a doctor is a lifelong venture,” Gomez said. “An Indian king is quoted as saying ‘some people see god in everything. Some people see god as just another thing.’ My parting wish for you is that you may see God in every patient."

“Go graduates — practice outstanding medicine and science,” said Roger Hadley, MD, School of Medicine dean. “Embrace a journey of lifelong learning, and enjoy this remarkable privilege that is now yours.” 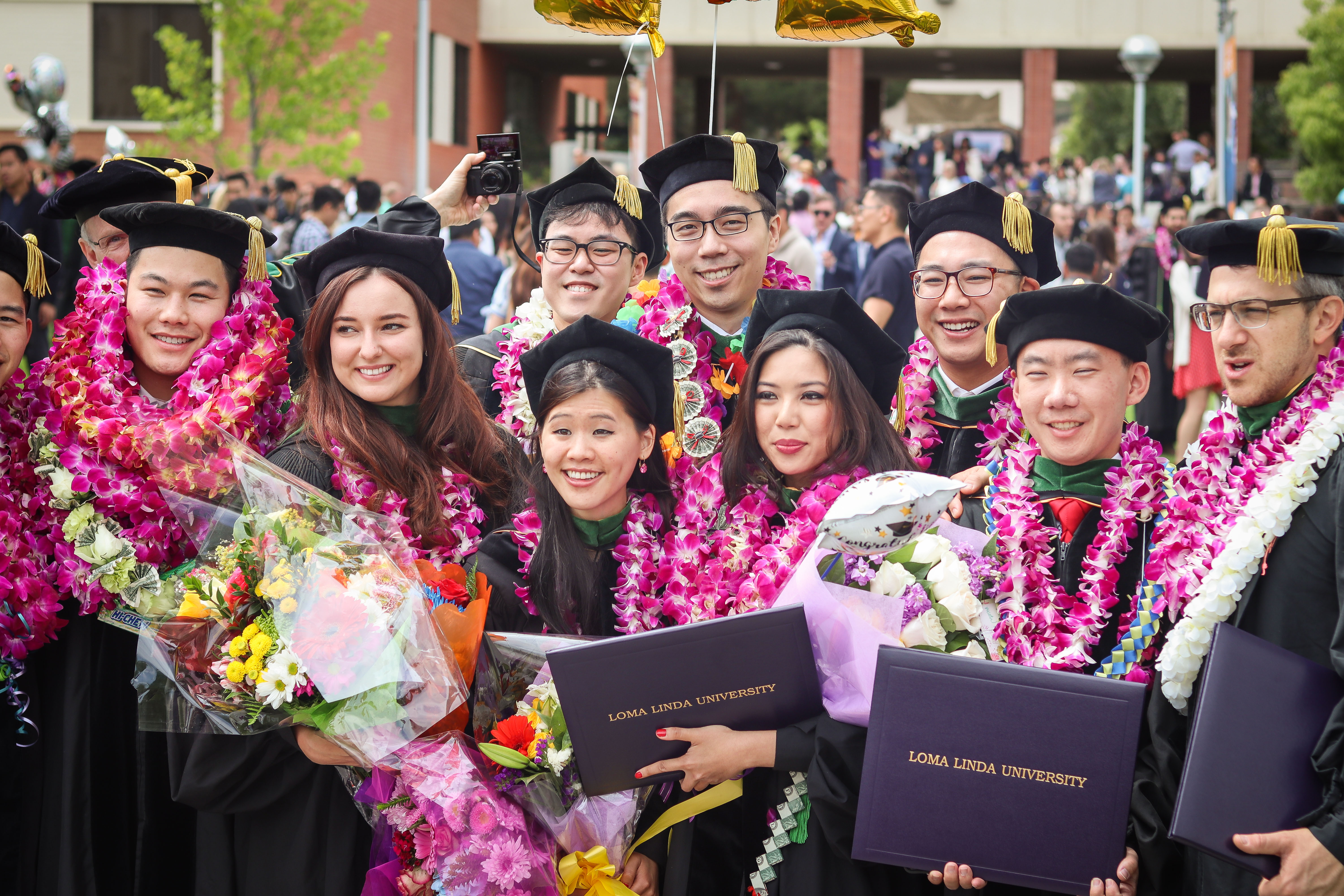 As part of its legacy at the School of Medicine, the class members of 2018 raised $30,000 to support a class international aid project to help Hospital Adventiste d’Haiti bring primary and preventive care to that country. The hospital, which began in the 1970s as a mission project, had to rebuild after Haiti’s 2010 earthquake. The Class of 2018’s gift will help build additional facilities to expand the hospital’s ability to provide outpatient treatment to the island.

The graduates also buried a time capsule that will be opened at their 25th reunion. The time capsule includes:

A number of School of Medicine and Loma Linda University Health awards were announced during the commencement ceremony. Honorees include:

Philip Gold, MD, School of Medicine Distinguished Service Award: After service with the Army Reserve Medical Corps in Hawaii, and time as chief of pulmonary services at San Bernardino County Medical Center, Gold joined the School of Medicine faculty in 1977. As a valued member of the pulmonary and respiratory care teams, his skill and compassion have earned him the high regard and respect of his colleagues in both the academic and clinical disciplines.

Siegmund Teichman, MD, School of Medicine Distinguished Service Award: Teichman has served the University and Medical Center for more than four decades in nephrology, his area of specialization, with dialysis and transplantation as his key interests. Teichman also shares his expertise and skills through publication of significant research studies in the area of nephrology and related areas. He is an active member of international, national, regional, and local medical associations and of nephrology and transplant societies; and has served on the boards of some of these organizations.

Lubo Zhang, PhD, University Distinguished Investigator Award: Zhang’s research focuses on maternal and developmental physiology. His specific interests are in the areas of molecular and epigenetic modulations of developmental plasticity in the programming of health and disease — particularly maternal adaptation and fetal and neonatal development in response to hypoxia during gestation. Zhang has published more than 260 peer-reviewed articles and has received more than $20 million in awards from the National Institutes of Health. He is currently program director of a National Institute of Child Health and Human Development (NICHD) investigation of gestational hypoxia and developmental plasticity.

Elisabeth Eisner, JD, University Distinguished Service Award: Loma Linda University Medical Center was unable to legally affirm its eligibility for tax-exempt financing. So Medical Center leadership sought help from a legal firm where Elizabeth Eisner practiced law. After researching the question, Eisner concluded it was permissible for LLUMC to receive tax-exempt financing. She also determined that the law, in fact, precluded the government from discriminating against the medical center solely as a result of its Seventh-day Adventist Church affiliation and mission. Eisner has represented LLUH entities in every major financial transaction since. In 2007, the California Supreme Court finally heard a case that discussed the question that Eisner researched in 1981. The opinion issued by the court was that faith-based organizations are permitted to receive tax-exempt funds — confirming her analysis a quarter of a century later.

Thomas and Violet Zapara, Doctor of Humanitarian Service Degree: For nearly four decades, the Zaparas have combined keen business acumen with generous philanthropic commitment to education, healthcare, and evangelism initiatives of the Seventh-day Adventist Church. Always swift to give God credit for the blessings they enjoy, they consider it a privilege as partners with God to bless others through their generosity. The Zaparas continue to encourage people to “give back” — to others, regardless of one’s financial capacity, and to God, who made everything and deserves “your life, your service, your thanks, and your appreciation.” Thomas Zapara also served for 25 years on the Loma Linda University Board of Trustees and continues as an emeritus board member today.

Ernest S. Zane, MD, University Lifetime Service Award: Zane, who joined the faculty of what was then the College of Medical Evangelists in 1960, was appointed associate professor of the ophthalmology department in 1979 and became interim department chair in 1993. His administrative priority during seven critical years of rebuilding the department and preserving the residency program focused on adding two new residents every year, later raising the number to three residents annually. Ultimately, 139 ophthalmologists have been trained during Zane’s 56 years of service. Zane has also shared his expertise internationally making numerous trips to South Africa, Taiwan and Taipei.