Following the tradition of Loma Linda University, a strong emphasis has been placed on international volunteer work within the department of plastic surgery. The department is strongly committed to international outreach through its program entitled "Operation Good Samaritan."

Through Operation Good Samaritan, the department is dedicated to providing reconstructive surgery and allied services for patients, particularly children, in underserved national and international communities. Since its inception in 1987 this self supporting group of physicians, nurses and allied health professionals has provided care to underserved populations around the world. This group of health care providers freely donates their time and efforts "to make man whole." 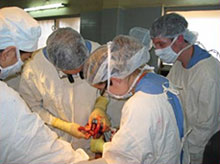 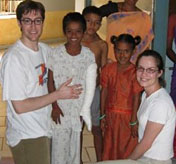 The serious disfigurement of children can have lifelong consequences medically, socially, and educationally.

The name "Operation Good Samaritan" was taken from the Good Samaritan Sculpture, located on the campus mall. This sculpture is a graphic representation of the parable told by Jesus in Luke 10:30-37:

"A man was going down from Jerusalem to Jericho, and he fell among robbers, who stripped him and beat him, and departed, leaving him half-dead. Now by chance a priest was going down that road; and when he saw him he passed by on the other side. So likewise a Levite, when he came to the place and saw him, passed by on the other side. But a Samaritan, as he journeyed, came to where he was: and when he saw him, he had compassion, and went to him and bound up his wounds, pouring on oil and wine; then he set him on his own beast and brought him to an inn and took care of him. And the next day he took out two denarii and gave them to the innkeeper, saying 'take care of him; and whatever more you spend, I will repay you when I come back.'"