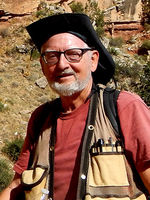 PROFESSOR OF BIOLOGY AND PALEONTOLOGY

Dr. Leonard Brand currently has several research projects in progress. One project is seeking to understand the Permian Coconino Sandstone in Arizona.  There is evidence of soft-sediment deformation that has not previously been published, and some interesting distribution of clay deposits. Student, and currently postdoc Sarah Maithel recently published part of her dissertation work on the Coconino, and a second paper has been accepted. More work will be coming along also. In collaboration with Dr. Arthur Chadwick, another project seeks to understand the relationship between the Lower Triassic Moenkopi Formation and the Upper Triassic Shinarump Conglomerate. A manuscript is near completion on this project with Ronny Nalin as a coauthor, analyzing the erosion at the contact of these two formations, and the lateral continuity of upper Moenkopi beds. One more project in the collaboration with Arthur Chadwick is a study of stromatolite layers in Cambrian/Ordovician limestones in western Utah. A recently graduated doctoral student has several excellent papers in process, on her study of the taphonomy of the many thousands of dinosaur bones from Arthur Chadwick’s dinosaur quarry in Wyoming. Another active project involves a study of fossil logs and widespread carbonate beds in the Navajo Sandstone in eastern Utah. 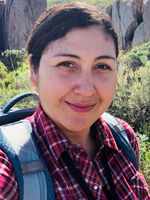 Dr. Ana M. Martinez-Ardila is an igneous petrologist who has current projects in geochemistry and geochronology of continental arcs. Her projects are located in Southern California, Colombia, Peru, and Chile. 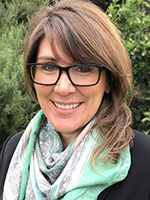 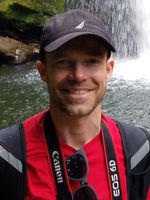 Dr. Monte Fleming is doing research in applied sedimentology. He has constructed a unique flume at Loma Linda University which has the ability to vary each of the depositional parameters independently, allowing for an in-depth look into how changes in the depositional environment affect the details of cross-bedded sand. 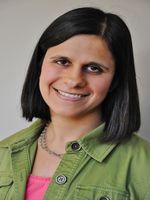 Dr. Sarah Maithel is a sedimentary geologist and sandstone enthusiast: she graduated with her PhD in 2019 and is currently working on a post-doctoral fellowship. Her research aims to describe and interpret bedding-scale sedimentary structures in the Permian Coconino Sandstone. While Arizona fieldwork remains a nostalgic part of her research experience, an ideal day involves experimenting with her favorite lab equipment – namely, one of the microscopes or the laser-diffraction particle analyzer – and teaching others how to use that equipment. She is passionate about science communication and intends to continue finding creative solutions to problems in research and life. 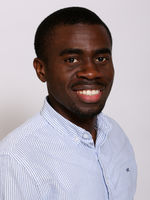 Dr. Timothy Ohiara's background is in sedimentary geology and petroleum geosciences. He has interests in mudstone sedimentology, depositional processes and burial history (diagenesis) of sedimentary deposits. He is currently working on the sedimentology and stratigraphy of the upper Cambrian shallow marine carbonate deposits of western Utah, USA. This research is based at the Geoscience Research Institute in partnership with other individual collaborators. The quest is to understand the processes responsible for the wide lateral extent of Cambrian marine successions and the exceptionally flat erosional surfaces that truncated these deposits over tens of Km2 in western Utah. This research involves extensive geological fieldwork, textural characterisation and isotope geochemistry analysis to produce possible depositional models for these Paleozoic, layer-cake, widespread deposits. 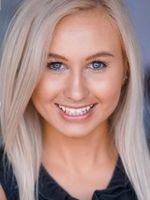 Once a hairstylist, Brittney Springer graduated with a Geology, BS, degree from LLU in 2018 and is now completing her Geology, MS, degree. Her thesis research focuses on characterization of microplastics in soil along the Salton Sea shore. Although her focus is microplastics in soil, she has research experience in areas such as environmental microbiology, surface chemistry, and materials science. She also enjoys learning GIS and attending GIS conferences. Since undergrad, Ms. Springer has published research in nanotechnology with applications in environmental remediation and dentistry. She also mentors visiting Summer undergraduate students each year, which includes teaching lab techniques, attending workshops, and preparing students to present at a Summer research symposium. Ms. Springer’s career goals remain somewhat open to a mixture of her experience and interests. 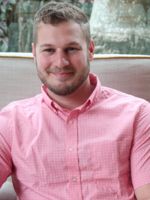 Christopher Rupe is a geology graduate student enrolled in the EBS departments’ master’s program. He is interested in learning about the geochemistry of the East African Rift system (i.e., plume-related magmatism) and the chronostratigraphy of the hominin fossil-bearing sites in the region of Olduvai and Laetoli, Tanzania. In addition, he is interested in studying the fossilized dune formations of the Navajo Sandstone outcrops that are exposed in the Paria Plateau region of Arizona. The goal of Mr. Rupe's research will be to reconstruct the internal bedforms of Navajo Sandstone outcrops using 3D photogrammetric software. 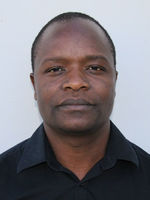 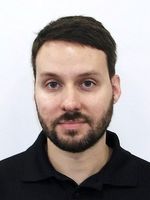 Daniel has always been interested in math and science. He earned two Bachelor's degrees, one in mathematics and one in geology, as well as a Master's degree in geology.  For his Master's research, he looked at the sedimentology and stratigraphy of a sedimentary basin in Peru. Daniel is currently interested in researching high-temperature geochemistry and geochronology of various tectonic environments. 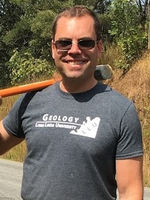 Lance Pompe is working on understanding episodic magmatism of continental arcs, studying the Andes throughout South America, but mainly focusing on Peru where he has done several seasons of fieldwork. This is part of the Arc Tempos research project headed by Scott Patterson at USC. He is firstly characterizing magmatic history using existing and new U-Pb zircon geochronology. The main research goal is to investigate the triggers of magmatic flare-ups by analyzing elemental and isotope geochemistry. Mr. Pompe has also done some related work on a project in Zambia. 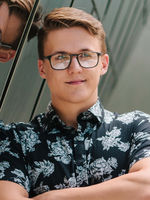 Levente Laisz is interested in sedimentology, stratigraphy, sequence stratigraphy, structural geology, seismic interpretation, and GIS. During his undergraduate program, he worked on a project modeling a partially buried volcano from the Miocene and associated strata located in Hungary with GIS software, creating geologic maps, cross sections and spatial models based on outcrop and well data. Mr. Laisz is currently working on a stratigraphy project in the Miocene section of the Funeral Mountains, focusing on lacustrine deposits and correlating ashfall tuff layers to nearby outcrops in the Amargosa Valley. 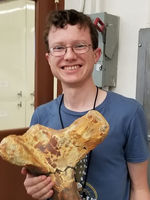 Michael Sprague's research involves pterosaurs, flying reptiles that coexisted with dinosaurs in the Mesozoic Era. Pterosaurs, colloquially known as “pterodactyls,” are commonly mistaken for dinosaurs. While dinosaurs and pterosaurs do share a common ancestor, pterosaurs themselves are not actually dinosaurs. He studies pterosaur fossils found in the Morrison Formation, a geologic unit that outcrops prominently in Utah, Colorado, and Wyoming, as well as other parts of the Western United States. The Morrison represents a slice of time called the Late Jurassic Period, approximately 156-146 million years ago. While dinosaur bones in the Morisson are extremely prolific, Morrison pterosaurs really come in one flavor: rare and scrappy. It’s unlikely anything close to a complete pterosaur skeleton will ever be found in this formation. Fortunately, there are other geological formations around the world that were being deposited at the same time as the Morrison that DO preserve complete pterosaurs, namely the Solnhofen Formation in Germany. While there are many beautiful – and complete – fossil specimens found here, they all suffer from the same problem – the pressures of overlying sediment weighed down on the bones during fossilization, rendering them flatter than pancakes. In the Morrison however, rare as they are, pterosaurs fossils are usually preserved three-dimensionally. Thus, these rare fossils can help us gain a better understand of the anatomy of the pterosaur groups we find elsewhere. 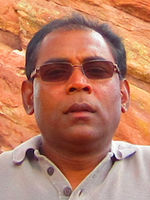 Natural resources, especially sand and water associated with sedimentology, hydrogeology, ichnology, and paleoclimate are Ranjan Fernando's general fields of interest. Mr. Fernando's research focus is to determine the controls on the formation and preservation of vertebrate trampled surfaces/ tracks within a co-set, Navajo Sandstone. The site is located near Coral Pink Sand Dunes State Park at Moccasin Mountain, Kanab, Utah. It has extensive outcrops with exposure rendering a 3D visual of subsurface features.  Vertebrate fossil tracks and trackways in Jurassic Sediments are an added bonus for my research in these eolian Paleo-dunes. On a broader scale, spatial features of temporal indicators, such as: cross strata, tidal flats, rhythmites, and varves generate an excitement in my quest for learning sedimentation cycles during geologic times. 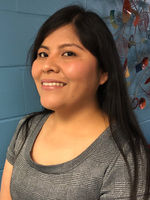 Raquel Bendita is interested in geochemistry research, especially about the geology of my own country. Ms. Bendita plans to do her research on the geochemistry in the Peruvian Coastal Batholic (PCB) that could be the best example in the world of a large granitic body formed in a subduction zone. She would like to study where the PCB magma comes from and how it changes over time and space. This research is important because it is studying origins history by using radiometric ages to understand how the PCB fits in the geologic column. She will use chemical analyses to measure major and trace elements and radiogenic and stable isotopes. First, major and trace elements are important because they can help to understand the processes and their rates in a magma chamber. Second, radiogenic isotopes are useful because they help clarify the source of the magma and the rates of plate tectonic processes. Third, stable isotopes are important because they can help understand the source of water in the magma. 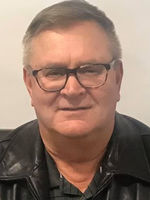 Dr. Roger Clawson is in his second year of the Graduate Geology Program at Loma Linda University. He graduated from LLU in 1975 with a DDS degree. He did one year of hospital dentistry training and oral surgery at LLUMC before serving as a missionary dentist in Zimbabwe Africa. In 1980, he was accepted into the orthodontic specialty masters degree program at the Loma Linda School of Dentistry. Upon graduating from orthodontics, Dr. Clawson and his family moved to British Columbia, Canada. He practiced orthodontics for 36 years and was in the field of dentistry for a total of 45 years. He has seen a lot of teeth! Dr. Clawson retired in 2018. He became interested in geology when he was a student at Pacific Union College at age 19. He is enjoying his learning experience at EBS. Dr. Clawson feels very fortunate to be at LLU. He hopes to choose a research project soon. Dr. Clawson is interested in tectonics, igneous, sedimentology and fossils. 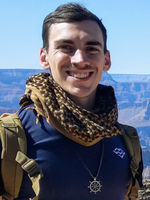 Taylor Kelln specializes in the analysis of shallow marine diatomites and other diatomaceous sediments, particularly those of the Pisco Formation, Peru. Specifically, he analyzes the micro-texture of these sediments and have elucidated signs of size and shape sorting, often at the sub-lamina scale. These appear to indicate that diatomite can undergo bedload transport and reworking, with additional evidence that seems to suggest that diatomite can accrete under combined-flow and storm-like conditions. 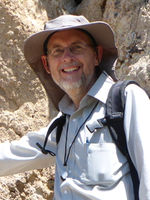 After teaching high school sciences for 18 years, Trent Logan is back on the other side of the desk having entered the EBS program in 2016 as a PhD student in Earth Science. Mr. Logan is studying the stromatolites (carbonate deposits produced by cyanobacteria) and oil-shale of the Green River Formation in SW Wyoming to better understand the lake dynamics and history during the time of accumulation of the lower portion of the Laney Member (early Eocene). In addition to measuring and sampling the outcrops in the field, he is using powder x-ray diffractometry, stable isotopic analysis, and petrographic microscopy in his research.